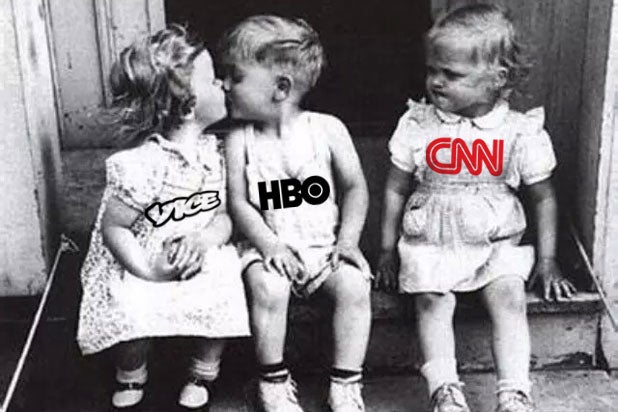 With Vice airing its third season on HBO, an announcement came two weeks ago that the two partners had expanded their budding relationship to include a daily newscast, the first daily offering in HBO’s history.

It’s not yet known what the format or content of the half-hour newscast will look like, but the partnership necessarily throws HBO into the news business in a big way, essentially pitting it — through Vice — against partner network CNN, which resides under the same Time Warner umbrella.

When asked about fortifying its Vice partnership, HBO CEO Richard Plepler told CNBC: “We may very well do it with CNN down the road, but Vice has been a wonderful partner for us. The show has performed extremely well. We think the brands are elegantly aligned … You see a very unique voice in the Vice storytelling, which we think syncs up beautifully with HBO.”

The HBO chief minimized assertions that HBO is becoming a daily news player: “We’re not so much in the daily news business, we’re in the Vice business.”

CNN, which aside from residing under the same parent company as HBO re-airs the premium channel’s documentaries occasionally, doesn’t seem threatened by the HBO-Vice marriage.

“What we do and what Vice does are very different things, so their partnership doesn’t concern us at all,” a network spokesperson told TheWrap.

An HBO insider familiar with the network’s strategy also downplayed the idea that one thing had to do with another when it comes to Vice vs. CNN, telling TheWrap that, other than HBO giving CNN documentaries from time to time, the two don’t have much of a direct relationship.

The two companies are saying all of the right things, and although the devil will lie in the details as to what Vice’s daily newscast will look like — and at what time it will air daily — it certainly has the potential to impact the traditional TV news landscape — and CNN.

Former CBS News VP Joe Peyronnin told TheWrap he thinks the HBO-Vice partnership has few if any ramifications for CNN: “Time Warner has probably concluded that Vice’s edgy and dramatic programming appeals to younger viewers and is better positioned on HBO. Vice will have little impact on CNN’s ratings because their audience is older and made up of more traditional news consumers.”

But the numbers might tell a different story. With the disclaimer that Vice’s half-hour episodes aired on HBO 24 times in March, for a total of 12 hours, while CNN is 24/7, CNN attracted 10 million millennial viewers (18-34) while Vice drew in 1.2 million in that same age group using a live+ 7-day blend.

A CNN insider told TheWrap the notion that millennials are watching Vice more than CNN is wrong, and that HBO might want to take a second look at those numbers when deciding which news organizations to create content with.

HBO did not comment on the record to TheWrap for this story, directing us to Plepler’s comments on CNN.