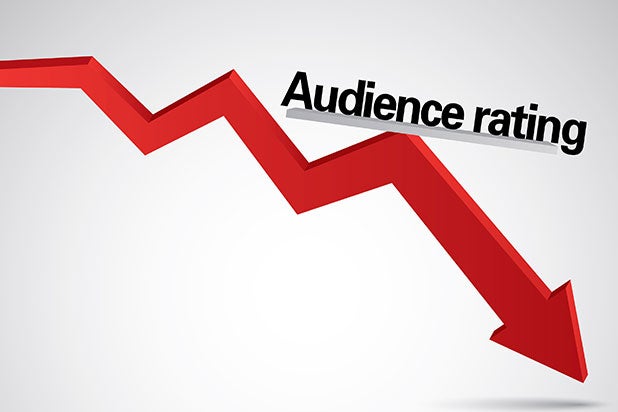 As cable TV gained widespread popularity in the 1980s and ’90s, experts predicted the demise of broadcast TV. They were wrong. The ’90s became widely known for having some of the broadcast networks’ best, most-watched series ever: “Seinfeld,” “ER,” “Friends” and “Home Improvement,” to name a few.

Although cable took longer to triumph than originally anticipated, it has reigned supreme for years for one simple reason: original content. HBO struck gold in 1998 with “Sex and the City” and followed that success with “The Sopranos” in 1999 and “Curb Your Enthusiasm” a year later.

When they noticed that cable TV offered better options, consumers began to shift their viewing away from the broadcast networks. From 2000 to 2009, viewership of ABC, CBS and NBC, as measured by average 24-hour ratings, fell an average of 5 percent per year. A shift in 2009 from live ratings to live-plus-3 ratings (viewership of the show in the 72-hour window following its live airing) helped curb the losses at those broadcast networks, keeping ratings basically flat through 2014. 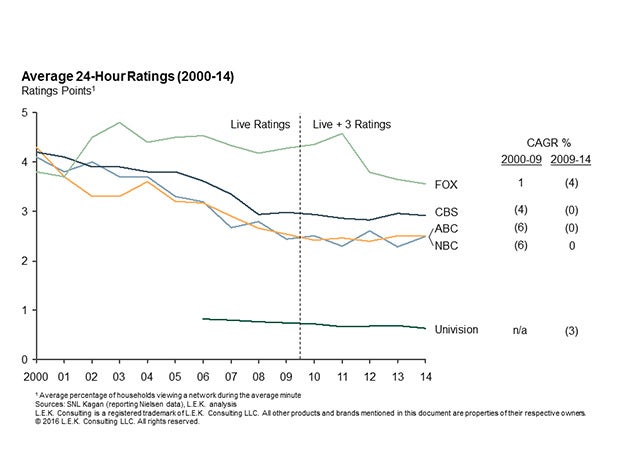 Surprisingly, even as ratings fell, advertisers did not abandon broadcast networks. In fact, the medium as a whole increased gross ad revenue by almost $2 billion from 2000 to 2014, although the gains were slow, at just 1 percent per year on average. 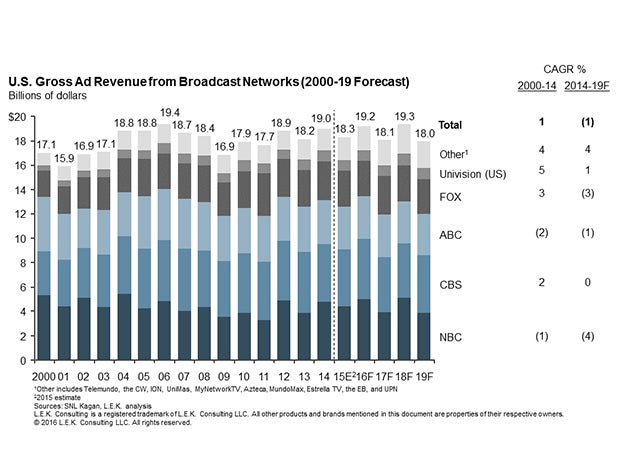 Will advertisers keep pouring money into broadcast TV even as viewers increasingly migrate to cable? Well, that answer is a bit tricky. Industry analysts project slight decreases in broadcast TV gross ad revenues over the next four years, which certainly is to be expected given the declining viewership trends. But where will advertisers take their dollars?

Most analysts would say advertisers will shift to online, but websites and social media do not offer the same mass reach that TV does, at least not currently. For now, reaching 20 million people with a 30-second TV spot is easier than trying to target 20 million Facebook users with a single ad in their news feeds.

This is Part 6 in a series on television trends by Dan Schechter, Gil Moran and Michael Kaufman from L.E.K. Consulting’s Media & Entertainment consulting practice.