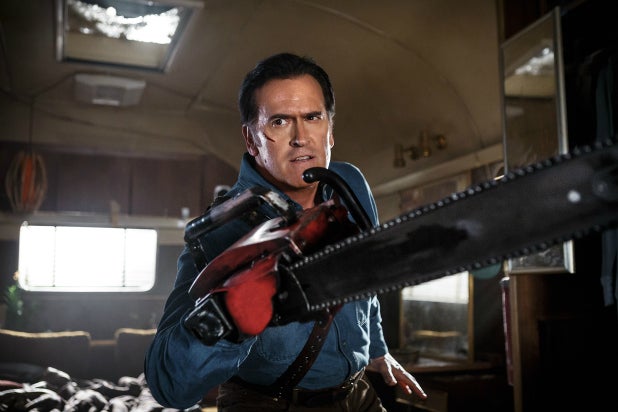 “Ash vs Evil Dead” has been renewed for a third season at Starz, an individual with knowledge of the situation told TheWrap.

The cast is led by the original film series’ star Bruce Campbell as Ash Williams — reprising his role from the “Evil Dead” film franchise — Lucy Lawless as Ruby, Ray Santiago as Pablo Simon Bolivar and Dana DeLorenzo as Kelly Maxwell.

Campbell and Raimi first teamed up in the original 1981 film “The Evil Dead.” Shot on a shoestring budget of approximately $350,000 in the woods of Tennessee, the film went on to gross over $2.4 million worldwide and achieved cult status.

Raimi and Campbell went on to reteam for two sequels, “Evil Dead II” and “Army of Darkness.” A remake of the original was released in 2013, with Raimi, Campbell, and Tapert all serving as executive producers. It grossed $97 million worldwide on a $17 million budget.

Starz actors meet with TheWrap for an interview and photo session