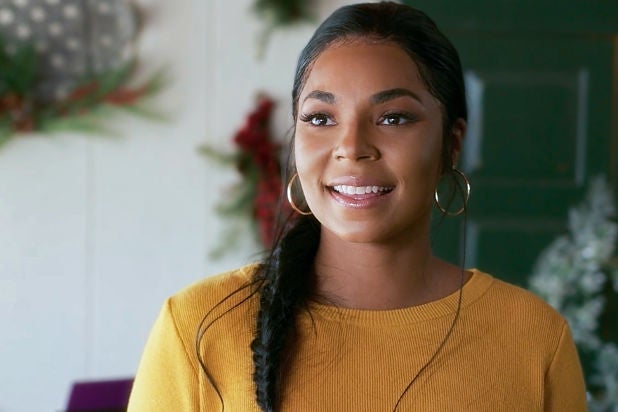 Initially breaking through with sultry hooks on songs in the early 2000s on songs like Fat Joe’s “What’s Luv” and Ja Rule’s “Always on Time,” Ashanti has spent the better part of the past two decades in the spotlight.

In recent years, however, she’s shifted her attention toward acting. Though she’s appeared on-screen beginning with 1992’s “Malcolm X” as an uncredited student and appeared in plays in high school, Ashanti has carved out a nice career as an actress in addition to her music career.

Thus, it made perfect sense for her to star and executive produce “A Christmas Winter Song,” which is one of the many rolled out as part of Lifetime’s Christmas movie series. Starring as Cilo, a Christmas shop owner, she forms a special musical bond with Fred (Fred Shaw), a former jazz singer down on his luck. The allure of having an executive producer role and it being a slightly-less conventional Christmas story also attracted Ashanti to this particular movie.

Also Read: Hallmark and Lifetime Have 70 New Holiday Movies - None With an LGBTQ Main Character

“It’s about family coming together, feeling cozy and getting into the holiday spirit,” she said. “It’s a different kind of a Christmas story and I think it will touch many different kinds of people. I think it’s a cool message that resonates after the holidays.”

There was also a much different reason why Ashanti was into doing another holiday movie, nevertheless a Lifetime movie.

“It’s funny how life comes full circle,” she explained. “I just remember watching Lifetime all the time. Like, to the point wherein a relationship, a boyfriend would be like ‘Aw, c’mon, Lifetime is on again?’ And the fact that I did ‘Army Wives’ a few years ago, Lifetime has been a staple in my household. I definitely would spend my weekends at home watching Lifetime all day.”

Also Read: 'Facts of Life' Cast Reunites in Trailer for Lifetime Holiday Movie 'You Light Up My Christmas' (Video)

Despite landing more acting gigs, Ashanti hasn’t hung up her mic just yet. Music continues to be a passion, as she still loves to write and sing. She continues to tour with Ja Rule, the two survivors of the Murder Inc. era. Though she last released an album of originals in 2014, she’s working on new material, including the August release of her song “Pretty Little Thing,” which features Afro Boy. In recent years, she’s appeared on tracks from the likes of Ty Dolla Sign, Lil Wayne, Tory Lanez and Mack Maine.

“I have a different kind of hunger,” she said of her ability to balance her schedule. “You have to have that in order to be successful in this business. You can’t put all of your eggs in one basket and you have to have that drive and hunger the first day you step into it.”

“A Christmas Winter Song” premieres on Lifetime on Saturday, Dec. 14 at 8 p.m. ET/PT