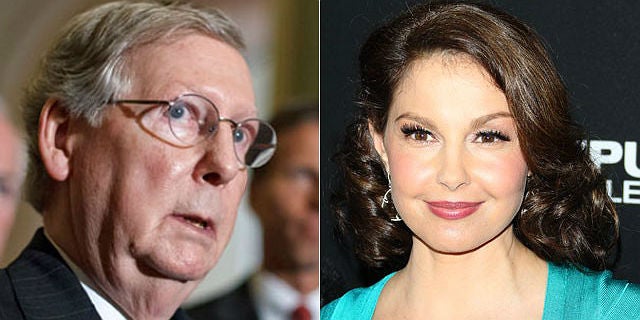 UPDATE, Tuesday 4:31 p.m.: Ashley Judd has responded to the reports that Mitch McConnell's campaign aides plotted to attack her on the basis of her struggle with depression, calling the tactic "the politics of personal destruction."

"This is yet another example of the politics of personal destruction that embody Mitch McConnell and are pervasive in Washington, D.C.," Judd said in a statement. "We expected nothing less from the Mitch McConnell and his camp to take a personal struggle such as depression, which many Americans cope with on a daily basis, and turn it into a laughing matter."

Again a secretly recorded tape is reverberating through Washington. One more time, the tape has been disclosed by Mother Jones. The big surprise is the subject — Republicans' view of Ashley Judd.

The release of an audiotape from a Feb. 2 meeting featuring campaign aides of Senate Minority Leader Mitch McConnell discussing the possibility of Judd’s candidacy as a Democrat for McConnell’s Senate seat is rekindling memories of the release of a tape last year of a speech by Mitt Romney to Republican donors.

Though Judd eventually decided not to pursue a candidacy, the tape features campaign aides to the Kentucky senator discussing their research about Judd and the possibility of using advertising and statements to make Judd out to be what Mother Jones called “a weirdo.”

Campaign aides pointed to Judd’s numerous public statements and the wealth of information about her suggested Judd’s candidacy would offer a “haystack of needles” to explore.

She is “extremely unbalanced,” said one campaign aide.

McConnell’s campaign has suggested the taping amounted to "Nixonian tactics" and asked the FBI to investigate the taping.

The possibility that Republicans would use Judd’s background to turn any campaign she ran into one more about Judd than about whether McConnell should be reelected had been a concern of Democrats.

Judd announced in twitter messages on March 27 that she had decided not to run for the post.

“After serious and thorough contemplation, I realize that my responsibilities & energy at this time need to be focused on my family. Regretfully, I am currently unable to consider a campaign for the Senate.

“I have spoken to so many Kentuckians over these last few months who expressed their desire for a fighter for the people & new leader.  While that won't be me at this time, I will continue to work as hard as I can to ensure the needs of Kentucky families are met by returning this Senate seat to whom it rightfully belongs: the people and their needs, dreams, and great potential.”

“Thanks for even considering me as that person & know how much I love our Commonwealth. Thank you!”  she wrote.