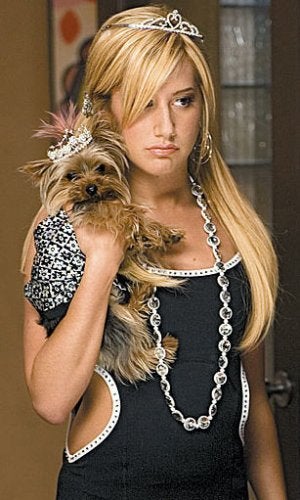 Tisdale also is an executive producer of the movie, along with "HSM" veterans Barry Rosenbush and Bill Borden.

After a talent scout spots Sharpay and Boi performing at a charity gala, the aspiring actress and her loyal pup headed to New York City. Breaking into Broadway is tougher than she expects, however, especially when she meets her match in a starlet who got her big break as winner of "So You Think You’re America’s Most Talented Performing Idol."

Gary Marsh, president of entertainment and chief creative officer at Disney Channels Worldwide, said in a statement: "In Sharpay, Ashley Tisdale brought to life one of the most memorable comedic characters we’ve seen in years. This movie captures the absolutely perfect next chapter in Sharpay’s life, as she tries to cultivate the humanity buried, deep, deep within her — a challenging and hilarious endeavor."

Tisdale won an MTV Movie Award and a Nickelodeon U.K. Kids’ Choice Award for her portrayal of Sharpay. She also voices Candace Flynn in the Disney Channel animated series "Phineas and Ferb."