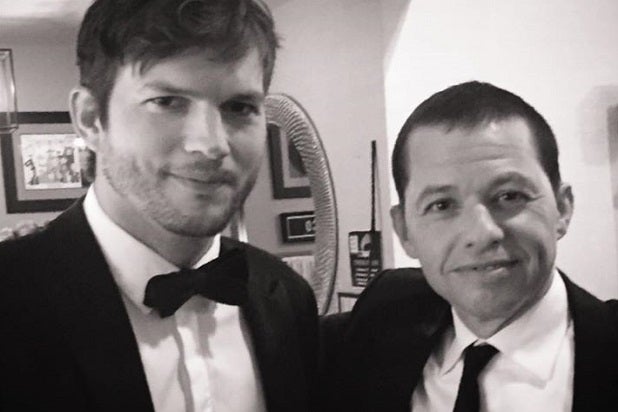 With CBS’s “Two and a Half Men” hurtling towards the finish line with its series finale on Thursday, Ashton Kutcher took time out to pen a professional love letter to his co-star, Jon Cryer, late Wednesday night.

“Thank you Mr. Cryer for making this job never feel like work. I will miss working with you every day,” Kutcher’s goodbye letter, posted to his Facebook page, reads.

Kutcher came aboard the series, which is wrapping up after 12 seasons,  in 2011 after the ouster of original star Charlie Sheen, who was shown the door after a run of volatile behavior. The actor, who broke through with the sitcom “That ’70s Show,” plays internet billionaire Walden Schmidt on the CBS show.

Kutcher went on to call Cryer, who plays Alan Harper, a “true partner” and a “gentleman.”

See video: Ashton Kutcher Hints at Charlie Sheen Return for ‘Two and a Half Men’ Finale

“You are a true partner in every sense of the word. In four years I never heard you complain and never heard you speak ill of another person even if they took advantage of your kindness and generosity,” Kutcher wrote. “Your are a gentleman. You are a talent. You are someone I look up to.

See video: Charlie Sheen Says Network Is Open to His ‘Two and a Half Men’ Return (Video)

There have been reports that Sheen’s character, debauched jingle writer Charlie Harper, might return for the series finale, though it’s not clear how that would occur, given that Kutcher’s debut episode featured Harper’s funeral.

'Seinfeld' Finale Anniversary: 7 Other Series-Enders That Missed the Mark

From the quick-cut "Sopranos" ending to the big bang that "Little House on the Prairie" went out on, here are seven other finales that fizzled.

"The Sopranos" (June 10, 2007) The jaggedly abrupt ending to HBO's mobster hit first had viewers wondering if their cable service had been interrupted. Then it made them wonder what David Chase was thinking. Seriously, ending a revered series with a quick cut to black? That would be like ending this entry in the middle of a sent
View In Gallery