Award-winning actor Willem Dafoe has played real-life characters T.S. Eliot, Pier Paolo Pasolini, Max Schreck and even Jesus Christ in the past. And now, with “At Eternity’s Gate”, he can throw troubled artist Vincent van Gogh into the mix. In the film, a meditative and often abstract portrait of the painter by artist and director Julian Schnabel, Dafoe had to channel Van Gogh’s mental anguish — but more important than that, he had to learn to paint.

In fact, that’s what originally drew Dafoe to the film — that it had an “accent on painting” and wasn’t focusing too much on Van Gogh’s mental illness. “When [Julian] said he was going to do a film about Van Gogh, I thought, ‘That’s cool,’ because I know a little about how he makes films and I know that he’s probably been thinking about Van Gogh all his life. So I thought that was powerful, that was a good set-up — a painter that wants to make a film about a painter with the accent on painting.”

But in order to play the part, Dafoe had to learn that new skill. “When you see someone painting in the movie, it’s me,” he said of the film in which he plays the Dutch artist who died at the age of 37 in 1890. Director Schnabel doubled as Dafoe’s painting instructor, and the actor said he practiced four or five times before filming the opening scene of Van Gogh painting a pair of battered old shoes in one continuous take. 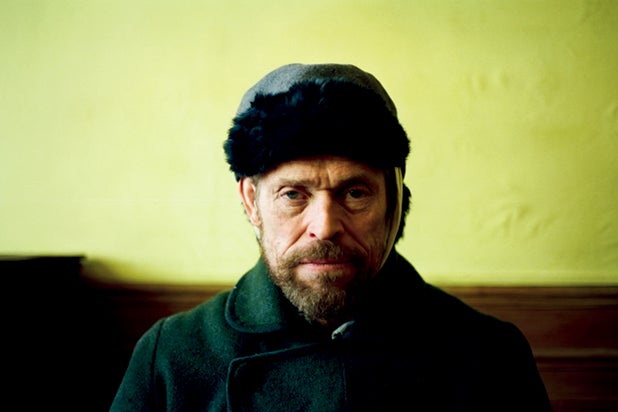 The rest of the set was adorned with other paintings, the work of a group of artists who’d made copies of Van Gogh’s most famous works. “It was a lot of fun for Julian,” Dafoe said. “He would check them out and then he’d mess with them. Usually, they were very good copies but then he’d go and give them life.”

But while he worked hard on his brush strokes, Dafoe said he didn’t think too much about getting into the emotional state of Van Gogh, who suffered from mental illness and delusions for years and infamously cut off his own left ear in 1888. Rather than examining Van Gogh’s suffering, Dafoe turned to actual letters written by the artist, most of which were written to his brother, Theo. “I just thought about saying those things that he says,” Dafoe explained. “He’s very direct and incredibly sincere, so it was really about getting behind the center. Saying those things with a certain truth. Exposing and examining those things.

“He had trouble dealing with people — not to mention women, not to mention things of the body,” the actor continued. “That was clear in his letters, but I didn’t have to think about that. The text is so beautiful that I didn’t think about his emotional state so much. It came out of doing actions.”

However, Dafoe said he needed deeper preparations for one particular scene in the movie in which Van Gogh’s close friend, painter Paul Gauguin (played by Oscar Isaac), tells Van Gogh he’s leaving after the two men had spent weeks painting together in Arles, France. “I knew I had to reach a certain point of despair and desperation, but that’s easy to do when you’re in a cold church and you’re saying these beautiful things and you feel lonely and you want company, and this other guy is basically saying, ‘You’re taking the wrong path and you are full of shit and I have to leave,'” Dafoe said. “He’s not an egoist. He wants people to like his work, and he’s disappointed that it hasn’t found an audience.”

Although it comes out on the heels of “The Florida Project”, the film that brought Dafoe his third Oscar nomination (and his first in 17 years), the actor said “At Eternity’s Gate” found him once again facing the challenges of every movie: “Not getting self-conscious, not getting ahead of yourself and letting things unfold — let something show you the way and don’t force it. Have it come to you.”

And he said he tried to talk himself out of any pressure he felt portraying one of the most influential artists of all time by saying, “This is not the Van Gogh. This is our Van Gogh.”

“That’s just my way to protect myself so I don’t get on a high horse,” he said. “Or I don’t stop letting the story work on me, you know?”