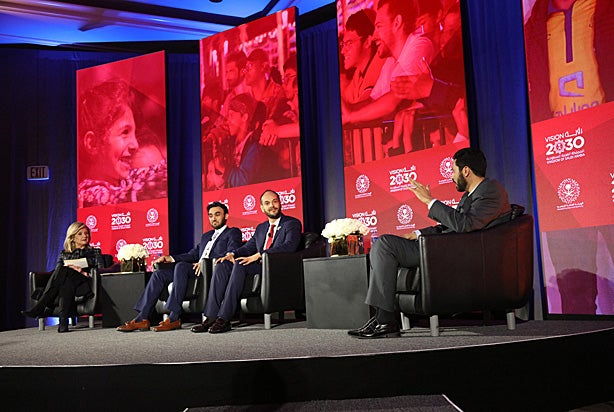 The Saudi Arabian government rolled out the red carpet for Hollywood on Wednesday at a glitzy event promoting its plans to invest more than $70 billion in entertainment infrastructure, and another $8 billion in spending with private sector entertainment companies.

He said, however, that entertainment has already begun to be a lucrative industry for the country.

Saudi Arabia has already announced investment plans in entertainment, including theaters, arenas and sporting venues of up to $71 billion. On Wednesday, Bafarat touted another $7.9 billion in spending with what he called “small and medium”-sized businesses.

The Saudi Government has audacious plans to build out a massive entertainment industry, and hosted the event as part of the crown prince Mohammad bin Salman’s visit meant to educate and excite Hollywood companies about the growing market.

The Four Seasons ballroom where it was held was full of power brokers from across the entertainment industry, including AMC Chief Executive Adam Aron, Patrick Corcoran from the National Association of Theatre Owners, Raine Managing Director Erik Hodge and Roy Salter, a senior advisor at FTI Consulting.

MbS, as the crown prince is often called, has met this week with Hollywood moguls ranging from Rupert Murdoch and Brian Grazer to Haim Saban, in what one insider called a combination “learning and promotion” offensive.

“I don’t see any challenges for us. I see it as an opportunity that people need to grab,” said Loai Bafaqeeh, the head of Saudi Arabia’s Quality of Life program, about the country’s plans to have a massive entertainment industry by 2030.

“The only challenge for us now is how to capitalize on the existing opportunity,” he continued.

Along with the more than $70 billion Saudi Arabia is investing in infrastructure, they are also looking to offer nearly $8 billion in investment partnerships with mid- and- small-tier companies interested in doing business in the country.