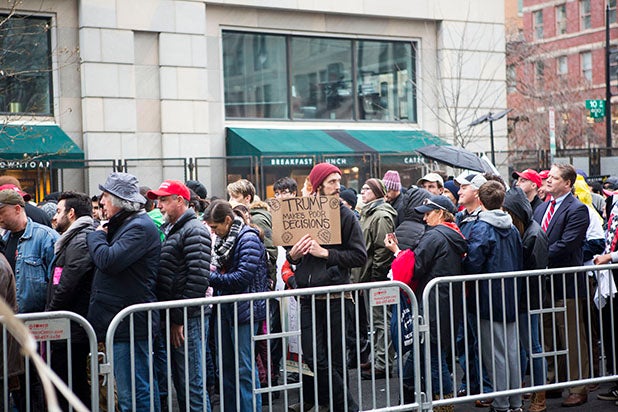 The Washington Post reported that more than  217 arrests were made in the nation’s capital as of Friday evening. Baltimore’s WBAL-TV reports that three police officers have been injured.

While the overwhelming majority of protesters are peaceful, a small number of others — some masked and dressed in black — were caught on video Friday breaking a Starbucks store’s windows. There were also shots of trash-can fires.

The Washington police used Twitter to detail what it said were acts of vandalism during protests: According to the department, at approximately 10:30 a.m., during an organized march in Northwest Washington, some members of the march “acting in a concerted effort” committed vandalism “and several instances of destruction of property.”

Specifically, police said, the group “damaged vehicles, destroyed the property of multiple businesses, and ignited smaller isolated fires while armed with with crowbars, hammers and asps.”

Some of the protests and clashes are near the the parade route that Trump will travel later today. MSNBC’s Brian Williams dubbed the situation “a tale of two cities.”

“Pepper spray and other control devices were used to control the criminal actors and protect persons and property,” the police statement added.

According to the Post, following President Trump’s swearing-in ceremony, protesters had a run-in with police in the Franklin Square area of D.C., hurling rocks, bricks and concrete chunks, as well as placing barriers and newspaper boxes on the streets.

Meanwhile, a spokeswoman for the San Francisco Police Department told TheWrap that approximately eight people have been detained in the city.

According to the spokesperson, some protestors were arrested in the area of 16th St. and 7th St. for blocking Caltrain tracks.

Other arrests were made at 11th St. and Market St., though the police spokeswoman did not have further details. The SFPD spokeswoman categorized the protests as “pretty peaceful.”