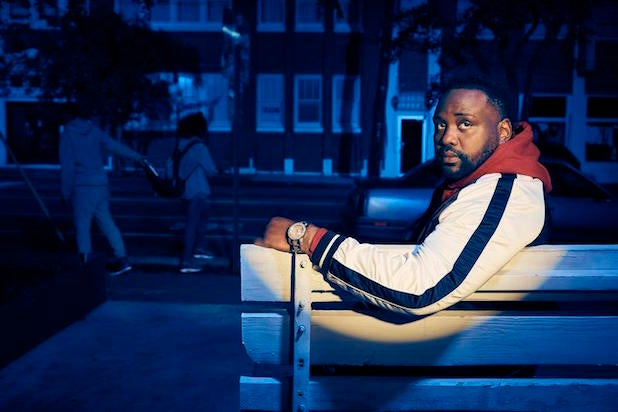 Just like his rapper persona on FX’s “Atlanta,” star Brian Tyree Henry isn’t quite used to getting stopped on the street by fans.

“It becomes a little daunting — a lot of daunting, actually — because now you can’t really navigate the streets the way you used to,” he told TheWrap in a recent interview. “I find myself having to go left instead of right, but I’m used to going right sometimes.”

Henry said that, yes, people definitely stop him by calling out “Paper Boi!” just like on the show. It’s “difficult,” but “good.”

“The Paper Boi persona, it does happen to me a lot … It’s all good, it just means that people are paying attention,” he said.

And these days, there’s a lot to pay attention to. He earned an Emmy nomination for his guest spot on NBC’s “This Is Us,” is currently starring on Broadway opposite Chris Evans in “Lobby Hero” — for which he was just nominated for a Drama League Award — and will be appearing in several movies this year, including the upcoming “Hotel Artemis.”

It’s a similar case with his “Atlanta” character Alfred, who in Season 2 has had to deal with being recognized in his home town like he never has before.

“He went to sleep as Alfred, and then goes on the streets and now he’s Paper Boi,” Henry said.

“It has its ups and downs,” the actor continued. “Like he can get free stuff and people still kind of want to, like, be in his space, but then people are grabbing him and taking pictures while [he’s] getting out of jail.”

“Those things, it’s a conflict for him. Constantly, I think, because he doesn’t really understand it, nor did he ask for it,” he said. “So it’s like, he still has to learn how to move through that … how to play the game. All the while playing the game, makes him exposed.”

Speaking of himself, Henry said the exposure “can be daunting. It can … kind of, like, make you forget exactly who you are at any given point in time. ‘Cause you’re like, ‘well wait a minute, hold on. What was I doing? Who am I? Where was I going?”

Also Read: 'Atlanta' Writer on the Insane Reality of Alfred Being Held 'Hostage' by a Barber

But the very thing that leads to exposure is what keeps Henry sane. “The work is actually the thing that keeps me the most grounded,” he said, because “it quiets the noise.”