Jovita Moore, an Emmy award-winning news anchor at WSB-TV in Atlanta, has died, seven months after her brain cancer diagnosis. She was 53 years old.

In April, doctors had discovered two masses on Moore’s brain. After surgery, she was diagnosed with glioblastoma, an aggressive type of cancer.

Moore was with WSB-TV since 1998 and moved to the main anchor desk in 2021. Previously, she worked at stations in both Tennessee and Arkansas. She earned her master’s degree in broadcast journalism from Columbia University Graduate School of Journalism in New York City. 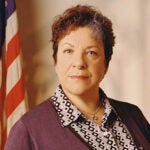 “Even those who didn’t know her personally felt a deep and personal connection to Jovita,” Atlanta Mayor Keisha Lance Bottoms wrote in a statement. “She loved Atlanta dearly.”

The National Association of Black Journalists, which Moore was a member of, posted a tribute to the anchor on Twitter, saying “[Moore’s] legacy of kindness, commitment to her craft, and reaching back to help the next generation will live on.”

Tyler Perry also expressed his grief over Moore’s passing: “Jovita Moore. We know you fought with all you had! I will miss your beautiful smile and warm laughter, let alone seeing you in my living room everyday,” Perry wrote on Twitter. “You will be missed greatly my friend. Many heartfelt prayers to your family. May your soul travel well! Life is but a moment.”

She is survived by her mother, her two children and stepdaughter, WSB reported.