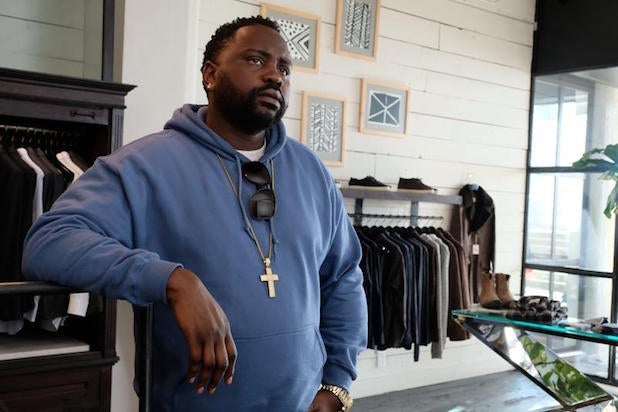 Warning: Spoilers ahead for “Woods,” Episode 8 of “Atlanta: Robbin’ Season.”

Things are about to change for Alfred Miles, aka Paper Boi, as he’s been struggling to keep it “real” rather than give in to the rapstar persona that has made him famous.

In Thursday night’s episode, titled “Woods,” Alfred spends the first half of the episode arguing with his Instagram famous not-girlfriend, who tries to convince him to post more often on social media and develop his brand. “I’m just trying to stay real,” Alfred tells her.

“You’re on the radio and you’re making money,” she says. “You’ve been not real.”

Also Read: 'Atlanta': Why Being Brian Tyree Henry Is 'a Lot of Daunting' Right Now

It clearly rubs Alfred the wrong way. “He’s been fighting so hard to be real,” actor Brian Tyree Henry told TheWrap ahead of the episode’s airing, adding that Alfred doesn’t want to give in to “this rapper persona.” He’s been trying to convey a sense of “I’m a real guy, just like you.”

But later in the episode, he ends up getting mugged at gunpoint and chased into the woods precisely because he’s not real-guy Alfred, but Paper Boi.

“After this episode, he’s going to realize that he’s not [a regular guy] anymore. Nothing can ever be the same again for him,” Henry said. “It forces him to confront a lot of things.”

Henry said that getting mugged and his time wandering around the woods forces Alfred to realize that he “doesn’t know everything about who he is.”

And neither do viewers. “We know everything about Earn’s background, kinda. We know pretty much about Vanessa’s, and we know — well — we know Darius,” Henry said. “But I don’t think that people really know that this is Alfred’s territory, this is his home. I don’t think Alfred has ever left Georgia, ever in his life.”

At the end of the episode, after Alfred has spent hours hiding in the woods, and walking around in circles, he seems to give in to what earlier in the episode he referred to as “that fake s—.” He offers to take a selfie with a fan who recognizes him in a convenience store, and he seems to realize that he can no longer be anonymous in his hometown. As Henry said, he’s learning “how to turn the game on.”