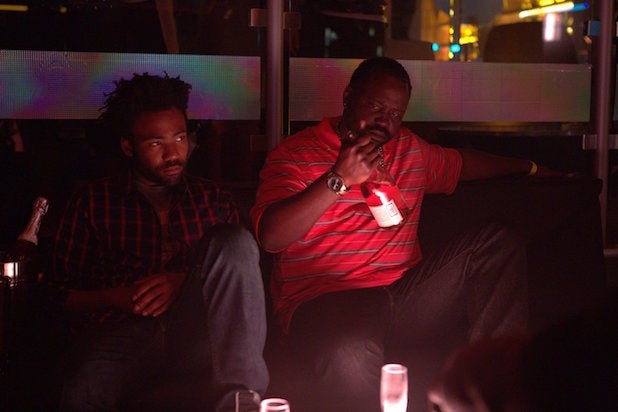 (This post contains spoilers for the most recent episode of “Atlanta.” Stop reading if you ain’t caught up.)

After last week’s meta trans-racial episode, we thought “Atlanta” couldn’t get any weirder–but it just did.

Tuesday night’s episode, “The Club,” ended in complete chaos: Paper Boi straight shook up the club manager for owed money, gun shots were fired outside the club, club-goers were running in all sorts of directions trying to get away and a few people got run over by an invisible car.

Yeah, you read that right. While you were watching some main characters do what they do, an invisible car ran over a crowd of people in the background.

Also Read: Everybody Lost it Over 'Atlanta' Trans-Racial Episode

And, yeah, someone was actually driving this magical car. It was Marcus Miles, the big shot celebrity who ended up buying the entire club and whose VIP section was popping more than Paper Boi’s.

One of the central themes of the episode was about how people, mostly stars, flaunt their money in the club. After seeing how much larger and more exciting Miles’ VIP section was, Paper Boi was a little bothered by it so he bought some more drinks and invited more people into his section, which was countered by Miles buying the entire club.

Miles’ invisible car at the end could be a testament to the extent some people will go to in order to show off how rich they are. Like, you know buying an invisible car.

Or the invisible car could have just been placed in the episode because Donald Glover clearly does whatever he wants. Either way, I wouldn’t bother looking for some kind of rational explanation for its existence.

Naturally, this whole thing caused some social media freakouts. Check out some of the best reaction tweets we found to the invisible car below.

I just SCREAMED at the invisible car !!!! #AtlantaFX

LMAO, NO NO cats did not just get plowed by the invisible car! I'm so mad at this show man. So mad, lol #AtlantaFX

OMG THEY GOT HIT BY THE INVISIBLE CAR???!!! #AtlantaFX pic.twitter.com/mjXKJUCsNA

Lmaoo that just clicked for me. RT @ErickFernandez When the invisible car ran people over. #AtlantaFX pic.twitter.com/GEri4CZ1eZ

Like I'm deadass crying over that invisible car ????????????#AtlantaFX pic.twitter.com/1jKVbmaIph

It was the invisible car! I just had to rewind. I can't. I cannot. Lol #AtlantaFX

I just rewinded that scene. I am SCREAMING at the invisible whip! Homie really was driving it too lmao #atlantafx

Coming down the street with the gang like #atlantaFx pic.twitter.com/rqmo964mna

You should get on FX’s hip-hop drama train while its still early, as creator and star Donald Glover is taking it to a lot of places

If you missed the premiere of "Atlanta" last night on FX, you missed one of the most promising and original shows of the fall season. With sparse but effective use of hip-hop, sharply-written dialogue and a relaxed pace, Donald Glover has created a series that floats from one thought-provoking topic to another while eliciting some dark laughs along the way. Here's what "Atlanta" has tackled in just the first two episodes.