The U.S. Department of Justice is still building its case against AT&T’s $85.4 billion acquisition of Time Warner, but some analysts believe the mega-merger will go through anyway.

In a lawsuit attempting to block the AT&T-Time Warner deal, the DoJ has argued the vertical merger would be detrimental to consumers. The government says a combined AT&T-Time Warner could use its newfound leverage to raise licensing fees, charging more for its channels, which would in turn raise costs for viewers.

But BTIG analyst Rich Greenfield doesn’t think the DoJ has done enough at this point to back up that claim.

“The government has so far failed to show that vertical integration, even with must-have content, has historically led to higher prices for programming,” Greenfield wrote in a note to investors. “While predicting the outcome of a complex trial, particularly with a judge who has limited anti-trust case history, is challenging at-best, so far it appears the government has struggled to prove its theories of harm.”

Greenfield is not alone in his optimism for a go-ahead outcome. Before the trial started, CNBC “Mad Money” host Jim Cramer opined AT&T would likely win the case and that its stock was a “Buy.”

However, the market itself doesn’t seem as confident as Cramer does. Shares of AT&T are down about 5 percent from the stock’s closing price the trading day before its trial began on March 19. As for Time Warner, well, its stock is up all of 6 cents since just before the opening gavel.

Here are snapshots of the past month of trading for both public companies: 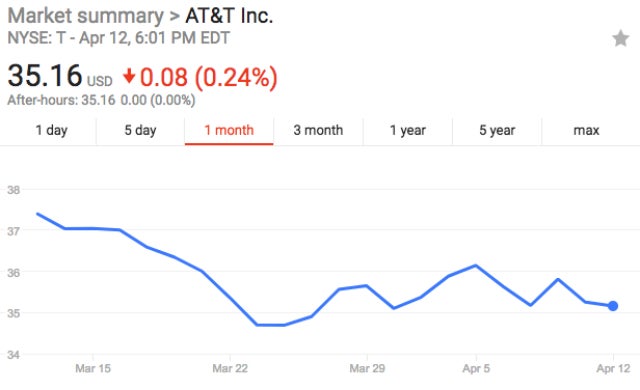 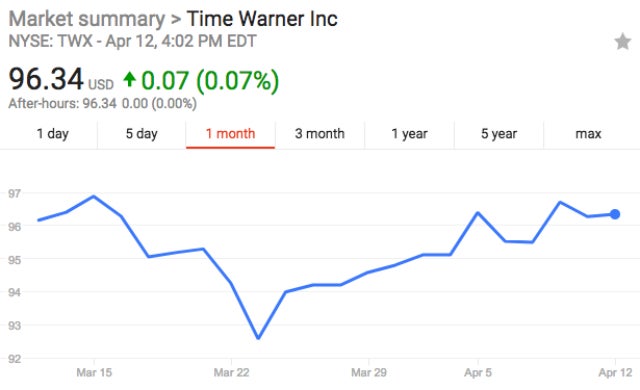 Also Read: Disney Must Make Offer to Buy All of Sky If Fox's Own Deal Falls Through

“They have presented good evidence that there has been a violation of the Clayton Act,” Bergmayer told TheWrap, referring to the 1914 antitrust amendment that focuses on price discrimination, price fixing and unfair business practices.

“And I think [the DoJ’s star witness, economist and Berkeley professor] Carl Shapiro presented a strong case and held up to some tough questioning.”

On Wednesday, Shapiro testified that if the proposed combination of AT&T-Time Warner is approved, consumers could be paying an extra $571 million annually by 2021. AT&T-Time Warner’s witness disagreed but, Bergmayer told TheWrap, “AT&T’s counter-evidence, by contrast, isn’t persuasive, and it often just promises that the company wouldn’t do the things it has every economic incentive to do.”

Also Read: Here's Everything You Need to Know About the U.S. Gov's Lawsuit to Kill the AT&T-Time Warner Merger

Right now both sides appear to be hitting the notes they need to hit, according to Georgetown economics and law professor Steven Salop.

“It’s very hard to know who’s winning. It’s not like a football game,” Salop told TheWrap. “A lot is going to rest on how the judge interprets and uses in his analysis the AT&T-Time Warner arbitration provision.”

The arbitration provision essentially says that AT&T won’t black out Time Warner channels during negotiations with carriers, and it requires the combined company to enlist an arbiter to use fair market value to determine prices for things like licensing fees.

But in an article cowritten with Public Knowledge CEO Gene Kimmelman this month, Salop said he doesn’t think the arbitration is enough. Among the many issues Salop and Kimmelman identify is that the agreement doesn’t include HBO, nor does it include any new Time Warner networks.

At this point, how the trial shakes out all comes down to Richard Leon of the United States District Court for the District of Columbia, a judge who is not an antitrust expert. In other words, your guess is as good as ours (or Greenfield’s, or Cramer’s, or Shapiro’s, or Bergmayer’s, or Salop’s, or…)

AT&T and Time Warner did not respond to TheWrap’s requests for comment on this story. A rep for the U.S. Department of Justice did respond, though just to say, “Per Judge Leon’s instructions to the parties, we aren’t commenting on the case.”