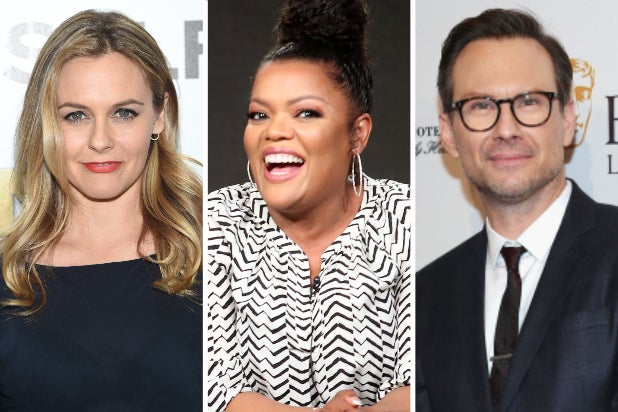 The scripted shows will launch “this summer,” Audible said. The lineup of new original podcasts joining the platform include “Phreaks,” a period drama about a fledgling hacker gang that creates the first online community by breaking into phone lines. Christian Slater — one of the lead actors in Sam Esmail’s acclaimed series “Mr. Robot,” will host the “Phreaks” podcast, which will run for ten episodes and is written by Matt Derby.

“I’m excited to share this story with Audible’s listeners and transport them to a time that changed the way we think about and use technology today,” Slater said in a statement.

Audible also recruited Golden Globe-winning actor Kevin Bacon to lead an audio adaptation of “Yard Work,” a novel by David Koepp — screenwriter responsible for blockbuster films including “Jurassic Park,” “Mission: Impossible,” and “War of the Worlds.” The supernatural novella is Koepp’s first work of fiction and follows an elderly judge coping with the loss of his wife.

“I hadn’t realized that for the thirty years I’ve been a screenwriter, I’d never been able to describe what a character was actually thinking or feeling — only what they said and did,” Koepp said in a statement Tuesday. “I love movie writing, but it’s such a joy to write prose and bring the focus back to the words in my Audible debut. And to have my friend and colleague Kevin Bacon bring life and soul to them is an honor and delight.”

“American Woman” actress (and former “Clueless” leading lady) Alicia Silverstone signed on to lead the upcoming podcast “Eat S–t Kenny Daniels,” a fictional show about a young, aspiring podcast host who goes on a “quest for redemption” from a former classmate in high school.

Also Read: How 'One Day at a Time' Pulled Off an Animated Episode - With Lin-Manuel Miranda! - in Only 8 Weeks

Silverstone said in a statement, “voicing this series was JUST TOO MUCH fun and not just because I got to wear sweatpants” during all the recordings.

Audible’s last addition to its growing slate of audio entertainment is a show called “Vroom Vroom,” to be co-hosted by “Conan O’Brien” co-star Andy Richter and “Community” actress Yvette Nicole Brown. The scripted comedy series follows the employees of a used car dealership trying to stay afloat and capture their slice of the “American Dream.”

Audible didn’t provide a set launch date for these shows, but noted they are expected to go live sometime this summer.