Television ratings for awards shows are on the decline. But that doesn’t mean people aren’t interested at all in the spectacle of Hollywood congratulating itself. They’re just getting their awards-show information the same way they’re getting all their other news: online.

After all, why slog through a show that’s multiple hours long and filled with unending thank-yous to folks you’ve never heard of? As Sunday’s Academy Awards approaches, producers have been scrambling to revamp the Oscar ceremony in an effort to raise the show’s ratings, which hit an all-time low last year when only 32 million viewers tuned in. But a new Yahoo report shows that those low numbers don’t necessarily mean nobody’s paying attention.

"Though we hear that fans aren’t engaging that much with the show on TV," said Sibyl Goldman, general manager of Yahoo! Entertainment, "there’s clearly a lot of interest in the material around the show — whether that’s the best dresses or the couples or the crazy hair on Mickey Rourke."

The Screen Actors Guild Awards also fared poorly, drawing the smallest audience since TBS and TNT began airing the simulcast in 2006. Viewership was down 15% on TNT and 10% on TBS, with the show dropping 12% in viewers overall from last year. But the next morning, the Yahoo! Movies page had 4.1 million unique visitors and 83 million page views in one day. 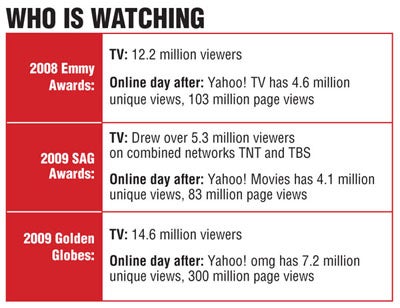 On Yahoo!, features like fashion photo slideshows often draw the most interest from surfers. Goldman said the company has seen rising interest as indicated by the large number of page views the galleries get — viewers are spending lots of time engaging and clicking on photos from the shows.

"Everyone likes to have those water cooler conversations at work, and because you can access the clips and photos from award shows online easily, you don’t have to sit through all of the show to get the payoff," Goldman said.