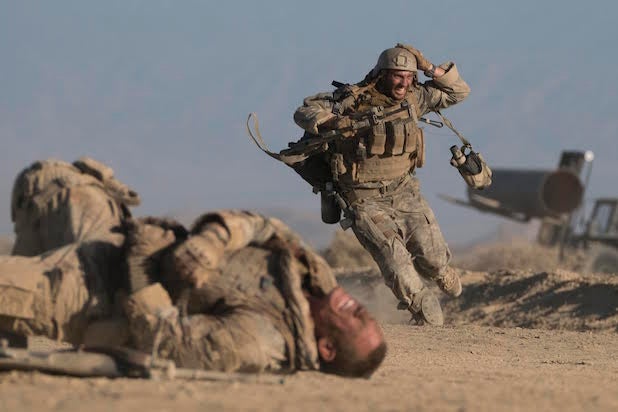 After partnering on this year’s acclaimed indie weepy “Manchester By The Sea,” Amazon Studios is collaborating again with Roadside Attractions to distribute the psychological thriller “The Wall.”

The film is directed by Doug Liman and stars Aaron Taylor-Johnson and John Cena.

It will be distributed by Roadside and is set to open in theaters on March 10, 2017.

The film follows two soldiers who become pinned down behind a crumbling wall by an Iraqi sniper. “Their fight becomes as much a battle of will and wits as it is of lethally accurate marksmanship,” the synopsis reads.

Liman directed “Mr. & Mrs. Smith,” “The Bourne Ultimatum,” and “Edge of Tomorrow.” Taylor-Johnson stars in “Nocturnal Animals,” in theaters now, and has starred in past films “Kick-Ass,” “Savages,” “Godzilla” and “Avengers: Age of Ultron.”

Cena is a WWE superstar who has also appeared in “Trainwreck” and “Daddy’s Home.”

“The Wall” was penned by first-time screenwriter Dwain Worrell.

Along with Kenneth Lonergan’s “Manchester By The Sea,” Roadside and Amazon have previously partnered together on other recent films including Whit Stillman’s summer hit “Love & Friendship” and Spike Lee’s “Chi-Raq.”

Also Read: Michelle Williams Admits She Still Has Not Seen 'Manchester by the Sea' (Video)

“Manchester By The Sea” has already earned more than $1.6 million in ticket sales and successfully expanded this past weekend to 48 theaters. The film will expand to 150 theaters this weekend.

“Manchester By The Sea” was named Best Picture this morning by the National Board of Review along with three other wins including Best Actor (Casey Affleck), Best Original Screenplay (Kenneth Lonergan), and Best Breakthrough Performance, Male (Lucas Hedges). Affleck won Best Actor at the Gotham Awards last night. Additionally, the film was nominated for five Spirit Awards including Best Feature.