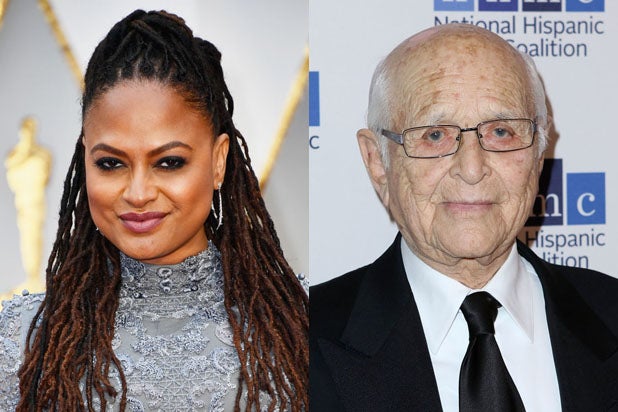 Norman Lear and Ava DuVernay are two Hollywood headliners who have never shied away from addressing the country’s biggest elephant in the room — race relations. They lived up to form on Tuesday, as the writer and producer behind iconic sitcoms like “Good Times” and “Sanford and Son” and the director of “Selma” and the “13th” bantered about the 44th president of the United States in terms that had some in the gilded audience chuckling nervously.

At a morning panel at the Milken Global Conference in Beverly Hills, moderator and NBC News correspondent Alex Witt asked Lear and DuVernay about the legacy of President Barack Obama, sparking an interesting exchange between the two.

“How black do you think Obama was?” Lear asked DuVernay, who is also helming Disney’s upcoming “A Wrinkle In Time” film.

After that, Lear mentioned a moment he remembered in the first 2012 presidential debate with Mitt Romney where Obama was looking down and Romney was in his ear aggressively making his case.

“It was clear, I thought, that it was the man giving it to the boy,” Lear said. “Was there a nine-year-old black kid in Obama that was lost [in that moment]?”

Lear said Obama will likely be looked upon favorably by history and the future establishment, while DuVernay said she was “amazed” by what Obama accomplished despite the vitriol. However, she did say that believing one man could change systemic racism in the United States was naive

“It points to a real juvenile notion that one black person could be held up in this way [and systemic issues would be resolved],” she said.

At the start of the conversation, Witt asked Lear whether using humor in his classic 70s sitcoms, including “All in the Family,” “One Day at a Time” and “Maude,” was an intentional move to try to bring people together after the tumultuous 1960s.

“I’m a serious person,” Lear told Witt. “I think I understand the issues of the human condition. I understood it the day my father was arrested and went to prison and my mother was selling the furniture. I was nine years old and some guy wants to buy my father’s treasured red leather chair. He puts his hand on my shoulder and says, ‘you’re the man of the house now.’ I don’t know if I knew the word a–hole then…”

DuVernay said she chose to work in drama instead of comedy for a different reason.

“Because I’m not funny,” she said.

DuVernay’s most notable films tell stories about civil rights and race relations, which remain a major issue in the country, Witt said, referencing the killings of Trayvon Martin and Philando Castile. But DuVernay said that while progress is slow, it’s real.

“In terms of artists having this conversation and having this exchange,” DuVernay said. “In front of an audience that looks like you guys do. That wouldn’t have been likely 50 years ago. It would be disingenuous for me to say it’s the same as it was back then.”

She didn’t want to downplay the current “challenges,” saying reform is “not as deeply rooted as it should be — but it’s happening.”

DuVernay also addressed the “Oscars So White” controversy, saying she didn’t believe racism was the reason her civil rights biopic “Selma” didn’t score an Academy Awards nomination, “but other people did.”

But even as race relations in America have a long way to go, DuVernay credited her co-panelist for his role in bringing people together, introducing much of America to a world people in their communities were a part of, but so many of them knew nothing about through his shows.

“It was so striking at the time when Norman’s work that really centered black life was in people’s homes every day,” DuVernay said, mentioning Lear’s sitcom “Good Times.” “He had to introduce the network to the world of a black domestic worker who had a husband and a family life.”

“I’ve wondered for years, does television lead or is television mirroring what’s happening in society,” Lear said. “I guess it’s both — it mirrors and it leads, and it introduces XYZ to people who don’t know XYZ.”

The two wrapped up their talk with Lear talking about one regret he has over his nine-plus decades on Earth.

“I have never been arrested,” Lear said. “I want to be arrested for one good reason.”

“We can work on that,” DuVernay said.