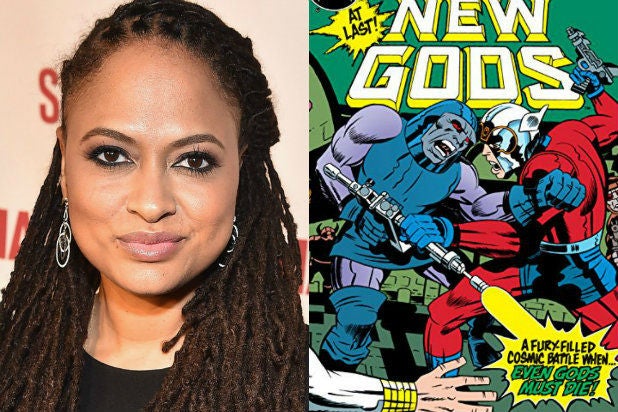 Ava DuVernay is jumping from Disney to Warner Bros., and is in final negotiations to direct the DC Comics adaptation “The New Gods,” TheWrap has learned.

Created by legendary artist Jack Kirby in 1971, “The New Gods” focuses on twin alien planets, the idyllic New Genesis and Apokolips, a polluted hellscape. Ruled by equally powerful but morally opposite leaders — New Genesis by the benevolent Highfather, Apokolips by the despot Darkseid — the comics depicted Darkseid’s efforts to destabilize the fragile peace between the worlds as part of his scheme to eliminate free will from the universe.

Characters and concepts that originated from “The New Gods” include the villain Steppenwolf and wormhole-computer hybrid machines called “Motherboxes,” both of which were featured in 2017’s “Justice League.” Whether or not Duvernay’s “The New Gods” will be tied to DC’s shared movie universe is not known, but Warner Bros. is moving quickly find a screenwriter who will work closely with DuVernay on the story.

Attorneys Nina Shaw and Gordon Bobb represented her in the deal.

Also Read: How 'A Wrinkle in Time' Could Still Find Box Office Success

Duvernay’s current movie “A Wrinkle in Time” still faces an uphill battle for box office success. It made $33 million in its opening weekend against a $103 million budget, and has made just under $42 million worldwide with a slow overseas rollout still to come. If the film shows the same performance as “Tomorrowland,” another Disney release that opened to $33 million in 2015, it’s looking at a final total of only $200-250 million.

DuVernay is repped by CAA and Del Shaw.