1. Watch Out for David Michôd
Australia has long fought above its cinematic weight, delivering to the world a wealth of film talent disproportionate to its small population. The “World Cinema” section of next year’s Sundance will unveil “Animal Kingdom,” the debut feature of the latest Aussie A-list director in the making: David Michôd. I visited the Melbourne set earlier this year was mightily impressed by Michôd’s vision for his crime drama, which stars Guy Pearce, Ben Mendelsohn and newcomer James Frecheville. Confirming Michôd’s wide-ranging talent, he also wrote “Hesher,” Spencer Susser’s directorial debut, which stars Joseph Gordon-Levitt and Natalie Portman, and which premieres in Sundance’s main competition. To get a measure of their talent, watch their collaboration, zombie-short “I Love Sarah Jane” below. It’s a classic. (And see Michod’s just-as-excellent “Crossbow” here.)

2. Boom!? Let’s Not Hug This Out
“Entourage: The Movie.” Really, are we going there? Making Vinnie Chase into a real movie star?As much as I love the show — and I thought Season 6 was just great, despite the carping of hipsters who said it’d jumped the shark — I’m not sure we need a big-screen adaptation any more than we needed the “Sex and the City” movie.

3. Bring on the Klosterman Flicks
Slashfilm has a terrific excerpt of an interview they did with Chuck Klosterman about the prospects of his fantastic nonfiction books “Killing Yourself to Live” and “Fargo Rock City” being made into movies. I also can’t wait to hear his theory about how “Avatar” is the “Chinese Democracy” of cinema. I fear he may be right.
4. "Avatar" Overload
And on that front … Every day there are more “Avatar” clips on TV, new excerpts on the web, exclusive new photographs, etc. I am now in the (I think) enviable position of having only seen the first trailer once — and on a computer, months ago. There’s a massive over-hype and over-exposure dilemma with James Cameron’s revolutionary sci-fi epic — and you’re part of the problem. I’m suggesting that to maximize enjoyment (and minimize disappointment), put yourself on an “Avatar” black-out until it hits theaters. Fifteen minutes of preview footage? Behind-the-scenes clips? Isn’t it all a bit like tearing open the wrapping paper to peek at the presents and then spending the lead-up to Christmas feeling deflated that you kinda know what you’re getting — and maybe mom and dad didn’t get it exactly right? Being surprised by what Cameron unveils might actually, you know, be half the fun.
5. Remakes in Trouble?
Hallelujah if this is a trend we’ll see spreading — the remake announced only to be canceled. First McG’s “20,000 Leagues Under the Sea” — OK, strictly speaking not a remake but do we need another version? — sunk under the weight of budgetary pressures and a world who could care less. Now it’s announced that Steven Spielberg, whose DreamWorks recently walked away from a re-do of “Oldboy,” has given up on trying to bring invisible rabbit “Harvey” back to the screen. Kudos to Tom Hanks, who just couldn’t be tempted to step into Jimmy Stewart’s shoes.
6. Whatever Happened to the Clever Spoof?
In the wake of the “Scary Movie” and “Epic/Disaster/Etc Movie” franchises, it seems producers and writers have decided the only way to go is down. This week the trailer for “The 40 Year Old Virgin Who Knocked Up Sarah Marshall and Felt Superbad About It” is doing the rounds. At least it’s only a DVD. But what of “Transylmania”? Surely one of the stupidest, least appealing horror-spoof trailers since, well, “Transylvania 6-5000” — and it’s in cinemas! Quick vote, people, which is worse? 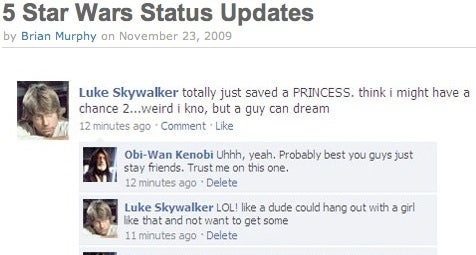 8. Mimacs to the Max
Empireonline.co.uk has an exclusive trailer for Jean-Pierre Jeunet’s latest quirk-explosion, “Mimacs.” It looks fantastic – and comes with sound design that’s reminiscent, and as effective as, “A Serious Man.”

9. Nic Cage’s Bible — Own It!
If you saw “Knowing” then you know it was nuts. But in a good-bad way, featuring as it did aliens who looked like 1980s Eurotrash and born-again spaceland bunnies in the finale. Now real fans can buy up screen-used props at total bargain prices! My favorite is Nic Cage’s Bible – currently only attracting $20 on Ebay.

10. Overheard in the Newsroom: The Movie
Forget “Entourage” on the silver screen. Some enterprising agent-producer-type person ought to acquire the rights to this very popular, always very amusing series of bitterly funny quotes supposedly uttered by journalists, editors and other muckrakers the world over. It’s kinda “State of Play” meets “The Office."
Samples:
“Our job is not to judge if they’re right or wrong. Our job is just to lend voice to their stupidity.”
Editor to Designer: “This entire page is about Christmas … except for that dead hooker."