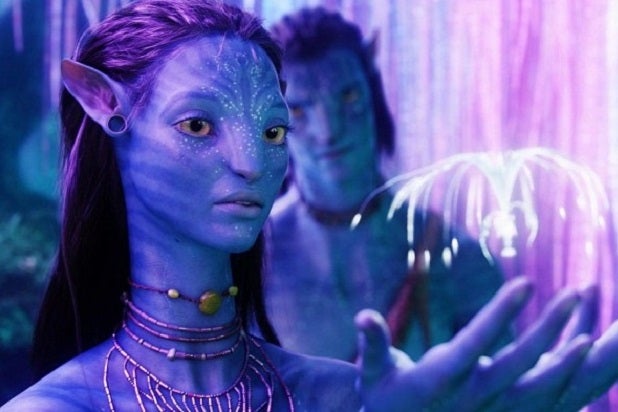 We’re now less than two years away from the release of “Avatar 2,” and while there’s still no official images from the film, we got our first look at some exotic and tropical new concept art that takes the Na’Vi to realms beyond Pandora.

“In the #Avatar sequels, you won’t just return to Pandora — you’ll explore new parts of the world. Check out these brand new concept art pieces for a sneak peek at what’s to come,” the official “Avatar” Twitter account tweeted on Tuesday along with four drawn still images.

The images were unveiled as part of a presentation at the CES conference in Las Vegas Monday night, at which James Cameron was present to announce a new partnership between Avatar and Mercedes-Benz on the VisionAVTR car inspired by the worlds of Pandora.

In them you can see two Na’Vi standing on a cliff side overlooking a vast ocean or another where the Na’Vi are flying over sandy dunes in the water in front of a giant, floating island, all with the massive planets and moons looming large in the background.

Also Read: Matt Damon Says He Passed on 'Avatar' - and 10% of the Blockbuster's Profits

Cameron’s “Avatar” sequels have been delayed and pushed back several times both as Cameron fine-tunes the film’s technology and between Disney reshuffling its schedule after acquiring 20th Century Fox. “Avatar 2” was previously pushed back a year to now open in Dec. 2021 after an expected opening in 2020. Then the third film will be released in December 2023, a two-year bump from its originally planned date. “Avatar 4” opens December 2025 and “Avatar 5” opens December 2027, alternating years with “Star Wars” releases for the bulk of the next decade.

Cameron is shooting all four sequels simultaneously, and Fox had originally planned to release the first sequel as early as Christmas of 2016, but the massive undertaking kept that from becoming a reality. He’s also assembled an impressive cast that added Kate Winslet, David Thewlis, Michelle Yeoh, Jemaine Clement, Oona Chaplin, Edie Falco, Cliff Curtis and CCH Pounder to all four sequels.

Check out the new concept art below:

In the #Avatar sequels, you won’t just return to Pandora — you’ll explore new parts of the world.

Check out these brand new concept art pieces for a sneak peek at what’s to come. pic.twitter.com/bfZPWVa7XZ