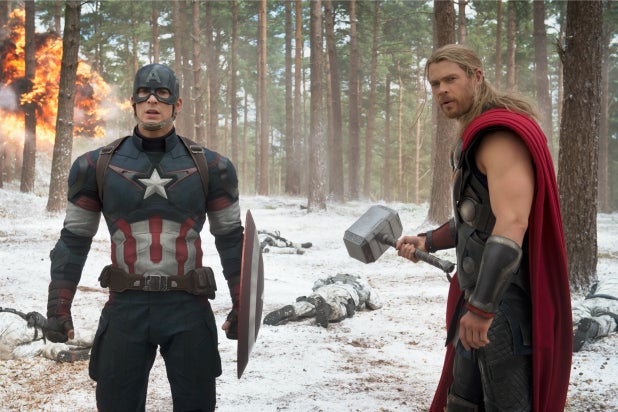 Sequel fatigue for the second chapter of any cinematic saga is generally a given, but “Avengers: Age of Ultron” sags under the weight of not only its 10 Marvel Cinematic Universe predecessors, but also the dozen or so already-announced follow-ups.

In the first “Avengers,” writer-director Joss Whedon showed a facility for bringing modern comic books to the screen with equal parts snappy banter and awe-inspiring mayhem, and while those gifts remain evident in “Ultron,” you can feel the functionality of Disney’s Marvel movies overwhelming the fun. This latest film isn’t a cheat, but neither is it a delight.

“Ultron” begins with the action already in progress, with Iron Man/Tony Stark (Robert Downey, Jr.), Captain America (Chris Evans), Thor (Chris Hemsworth), the Hulk (Mark Ruffalo), Black Widow (Scarlett Johansson) and Hawkeye (Jeremy Renner) storming the castle of Baron Strucker (Thomas Krestchmann), the last uncaptured agent of Hydra. Strucker possesses the Staff of Loki, which contains a jewel that drives the plot in various directions, particularly when Stark realizes that there’s an intelligence within the stone that could provide AI for an army of robotic Iron Men to keep Earth safe from outside invaders.

Stark is swiftly punished for his hubris when that artificial intelligence becomes Ultron (voiced by James Spader), who infiltrates the world’s computers and begins assembling his own mechanical army to erase humanity and allow the planet to start over without us. Aiding Ultron are two former lieutenants of Strucker’s, twins Wanda (Elizabeth Olsen) and Pietro Maximoff (Aaron Taylor-Johnson), whose powers (as Scarlet Witch and Quicksilver) are succinctly summed up by SHIELD’s Maria Hill (Cobie Smulders): “He’s fast, and she’s weird.” (Hill is too tactful to point out that their powers do not include successfully grappling with an Eastern European moose-and-squirrel accent.)

There are moments of respite between the big battles, and that’s when Whedon can give us his trademark badinage. What he does less successfully is fit in quotidian moments with Black Widow, Hulk and Hawkeye, the characters who haven’t had movies named after them over the last three years. Add some crammed-in cameos from the sidekicks from “Captain America: The Winter Soldier,” “Thor: The Lost World” and “Iron Man 3,” and the film starts to resemble a phone booth crammed with frat pledges.

(Anyone not present and accounted for — Gwyneth Paltrow and Natalie Portman had other engagements, apparently — is at least mentioned in dialogue.)

All these minor characters and blueprints for their function in the coming chapters give “Ultron” a bloat that the prior film didn’t have, and while the movie jumps through enough hoops to remain entertaining on a basic level, it doesn’t have the giddy enjoyment factor of “Avengers” and “The Dark World” nor the smarts and character development of “The Winter Soldier.” Marvel movie die-hards will come away having found nuggets of pleasure, but those who complain about superhero sagas will find plenty to support their arguments here.

The ensemble cast (which also includes Don Cheadle, Stellan Skarsgård, Linda Cardellini and, of course, Samuel L. Jackson) knows exactly what they need to do and delivers it with a minimum of fuss; the scene-stealer of the bunch turns out to be Spader, who makes Ultron one of the screen’s drollest destroyers of worlds. Ultron is menacing but never unmotivated, and Spader knows just how to give Whedon’s dialogue the right lilt to make it both witty and terrifying.

It may well be that we’ll eventually stop looking at these Marvel films as discrete, individual experiences rather than chapters in an epic binge-watch, but even by those standards, “Avengers: Age of Ultron” feels like a solid but overstuffed episode, one more concerned with being connective tissue than anything else. Future Marvel-movie marathoners will find plenty of sandwich-grabbing opportunities during its running time.