“Did you want that at the highest quality resolution, sir?” 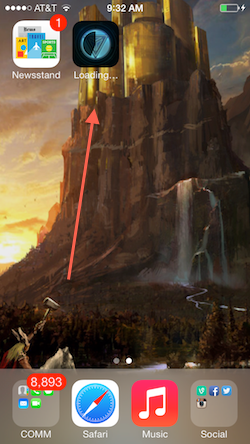 Disney/Marvel went leak-plugging late last month after the Comic-Con-only teaser spilled online, and now we know why: Because they wanted to use it as bait to get us to download the J.A.R.V.I.S. app.

Which, admittedly, we’re in the middle of doing right now (it’s taking a while, left).

(Update: They never succeeded in pulling down the full HD video, which you can still see in full on the link: ‘Avengers: Age of Ultron’ Comic-Con Teaser Leaks Online.)

In a press release Friday morning, Disney made the latest push for its comprehensive computer concierge app with a YouTube video (above) that doesn’t quite go all the way — it’s just a short bit of interview with Joss Whedon before he goes onstage in San Diego back in July.

A few early moments of the teaser rolls at the end … and then it directs you to get the app.

Which actually sounds kind of cool to an Iron Man fan. As Marvel puts it (typo, exclamation points theirs):

“Just like the real JARVIS, you will be able to interact with him using your own voice. Create customized alarms to wake you in the morning, download ringtones, check theweather, post to Facebook and more! Sync the app to your Blu-ray™ player to unlock hidden files and suits embedded throughout the disc, and experience the first-ever voice controlled Blu-ray!”

Done and done. Thanks Jarvis.