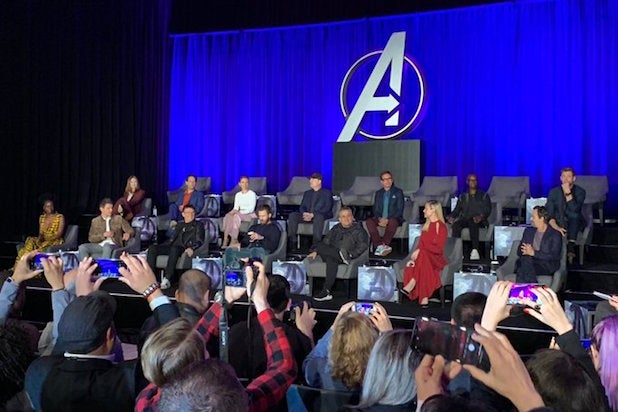 In a cheeky nod to the end of “Infinity War,” Sunday’s press conference for the upcoming “Avengers: Endgame” left several seats empty for the actors who played characters snapped into oblivion by Thanos.

“Post-Snap, there’s a few empty seats, so I’d like to welcome back the people that you see here onstage,” said “Iron Man” director and star Jon Favreau, who hosted the event.

While the cast and crew did their usual evasion of all things spoiler-y, Ruffalo strongly alluded that this would be the last time that the original “Avengers” cast would be together after first joining way back in 2012.

“It’s the family you wish you had, in a way. There’s something very bittersweet about this moment,” he said.

“As actors, we’re like vagabonds,” the actor who plays Bruce Banner and the Hulk continued. “We kind of bounce around. We have these intense relationships and then you don’t see anybody until you get nominated for something or you’re nominated in something and you end up at an awards ceremony.”

Here are your Avengers, with plenty of empty chairs meant for their fallen comrades pic.twitter.com/5sdyFw5JKv

Larson, the newest member of the family, noted that “Endgame” was the first time she performed as Carol Danvers, as filming for the crossover was scheduled before shooting began on “Captain Marvel.”

“I had to stumble and figure out who this character was, with no script for this and no script for ‘Captain Marvel,’ and perform for the first time in front of legends,” Larson said.

“There’s a balance: as big as it is, it still feels like a bunch of kids doing what I was doing over my summer break, making movies in my garage. There’s still this sense of wonder and play and encouragement. This film deals with heavy subject matters, so you’re bouncing between things that are deep and serious, then we’re going off and playing Boggle — which I am very good at.”