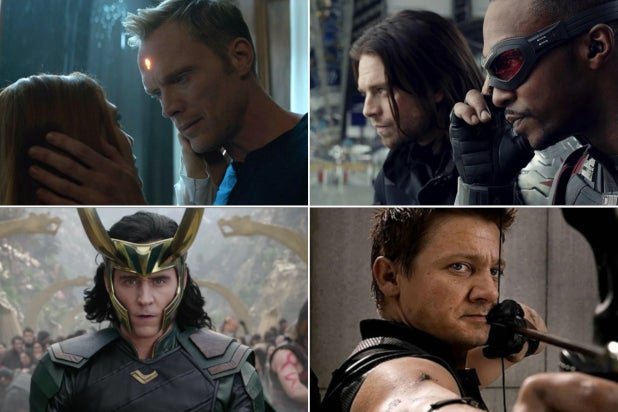 (Spoiler warning: Please don’t read this if you don’t want to know details about “Avengers: Endgame” and how it fits into the upcoming Disney+ streaming service.)

Now that Marvel Studios has wrapped its 22-movie “Infinity Saga” with “Avengers: Endgame,” the future of the Marvel Cinematic Universe is going multi-platform.

Even though “Avengers: Endgame” finally linked the big screen MCU to the TV-adjacent universe on ABC (more on that here), the connections between the big and small screen up until this point have been a one-way street. TV shows like “Agents of S.H.I.E.L.D.” and “Agent Carter” would reference the films, but not the other way around.

But with Disney+ such a high priority for Disney, the goal is to re-create the big-screen experience for home streaming, in a more cohesive way than the MCU ever did with ABC or Netflix. For starters, the Disney+ series are being overseen by Marvel Studios and is longtime creative overseer, Kevin Feige, rather than by Marvel TV.

“These will be major storylines, set within the MCU, with ramifications that will be felt both through the other Disney+ series we’re producing and our features on the big screen,” Feige said at an investor event earlier this month that unveiled Disney+. “A post-‘Endgame’ MCU will be extremely different and extremely focused on Disney+ tying into our future movies.”

Here’s what we know (and what we can speculate based on the outcome of “Endgame”) about each of the four series already announced for Disney+ — and yes, here’s where the spoilers for “Endgame” will start flying. (So click elsewhere NOW if you haven’t seen the film or don’t want to know what happens.)

• “Falcon and the Winter Solider”

This one seems likely to undergo a name change, even though Disney has already unveiled a logo for it.

Given that “Endgame” ends with an elderly Captain America (Chris Evans) giving Sam Wilson his shield, it’s a fair assumption that this series will focus on how Sam handles taking on the mantle of Captain America and how the two frenemies collectively move forward as allies. In the comics, both Bucky and Sam take on the Captain America moniker after Rogers retires the shield, so there is precedent here. It wouldn’t be a shock to see a funeral for Steve Rogers in the series. Although he didn’t die on screen in “Endgame,” he is now aged to be more than 100 years old.

This series could be a great example of what Feige means when he says the Disney+ will have an effect on future films. Theoretically, this series could be an origin story of Sam (or Bucky) becoming the new Captain America, and then he can show up in a future film in his comics-accurate red, white and blue attire.

This project is a bit confusing, since by the end of “Endgame” Paul Bettany’s Vision was still very much dead — though his beloved, Elizabeth Olsen’s Wanda Maximoff, a.k.a. Scarlet Witch, joins the fight against Thanos. And since the Infinity Stones, including the one ripped out of Vision’s head, were destroyed by Thanos at the beginning of the film, there doesn’t seem to be a way to bring Vision back. But there are two plausible options here:

The easiest route would be to reveal that Black Panther’s sister Shuri (Letitia Wright) was able to download a good amount of Vision’s consciousnesses when she was trying to take the Mind Stone out of his head in “Infinity War.” He could exist somewhere in the cloud, and Wanda could have a way to still be with him in a virtual reality setting. During the Disney investor event, Feige showed a promotional image for the show featuring the two in a 1950s-era setting.

The other, more complicated option, has roots in the comics, most notably in the famed “House of M” storyline. In that story, Wanda suffers a mental breakdown after losing her and Vision’s children, and she creates an alternate reality. This could be tweaked a bit to fit the MCU, where Wanda’s powers go off the rails while she is still mourning Vision, thus leading her to create a new reality for herself where she and Vision can live in 1950s domestic harmony.

Like Vision, Loki is still very much dead after “Endgame.” At least, the Loki we’ve all known — up until his demise in “Infinity War” — appears to be dead.

That’s because the still-very-much-villainous Loki manages to escape with the Tesseract after Tony Stark, Steve Rogers and Scott Lang time-travel back to the climatic Battle of New York from “Avengers” to try and grab the Tesseract for themselves. As we know, the plan goes awry and Loki manages to grab the cube and teleport… somewhere (and some time) unknown.

The series is said to center on Loki influencing historical events on Earth, so this could be the pre-redemption Loki using the Space Stone to cause mischief in this new, offshoot timeline. Feige even teased this at that Disney event two weeks ago: “He has quite a lot of history and stories to tell.”

The opening scene of “Endgame” saw Jeremy Renner’s Clint Barton, a.k.a. Hawkeye, training his teenage daughter how to shoot an arrow, before his entire family was dusted into oblivion by Thanos’ snap heard round the universe. As TheWrap previously reported, the Disney+ series will focus on Barton training Kate Bishop (a character from the comics who has not turned up anywhere in the onscreen MCU so far) to be the new Hawkeye.

Plus, after his time as a bloodthirsty, sword-wielding Ronin in “Endgame,” Clint is due for a good redemption story. This project, still untitled, is only one that hasn’t been formally announced yet.

Disney+ is also developing a non-canon animated series, “What If,” that will tell alternative stories featuring MCU characters, with the same actors lending their voices. For example, one of them is going to be Peggy Carter (Hayley Atwell) getting the super-solider serum and Steve Rogers using a suit of armor developed by Howard Stark.

“This is a great opportunity for us at Marvel Studios to tell stories in a new way,” Feige said, who teased the new projects will “dig into and expand upon the previous 23 [including the upcoming “Spider-Man: Far From Home”] films that we’ve made.” Disney’s streaming service, launching Nov. 12, is one of the company’s biggest priorities.

And, just like with “Star Wars,” the Marvel Cinematic Universe will be a major part of that.