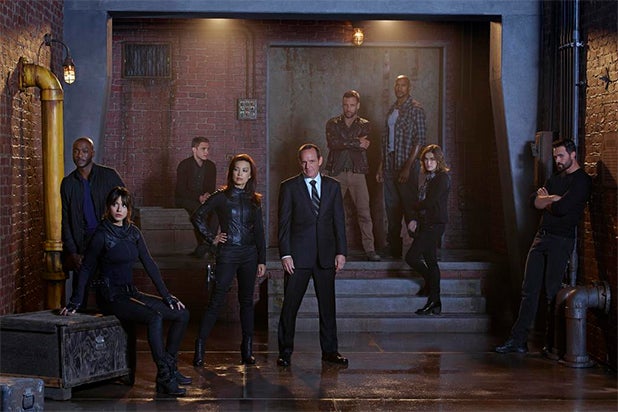 (Spoiler warning: Please don’t read this if you don’t want to know details about “Avengers: Endgame” and how it connects to the Marvel TV shows.)

“Avengers: Endgame” features many, many cameos — but only one that finally consummated the relationship between the Marvel Cinematic Universe and the ABC television shows starring Marvel characters.

When Tony Stark (Robert Downey Jr.) travels back to a S.H.I.E.L.D. base in 1970 to retrieve the Tesseract, he runs into his dad, Howard Stark (John Slattery). Stark the elder asks his driver why Tony seems so familiar. But the driver is familiar too: Fans of ABC’s short-lived “Agent Carter” recognized him as Edwin Jarvis, played by James D’Arcy.

In the first episode of “Agent Carter,” a young Howard Stark (this one played by Dominic Cooper from “Captain America: The First Avenger”) lent Jarvis’ services to Peggy Carter (Hayley Atwell). We know how important his service was to the Stark family, given that Tony Stark gave the name Jarvis to his first A.I. program — a kind of high-tech butler.

But Jarvis’ big moment in “Endgame” proved his commitment to fan service. It marked the first time that Marvel Studios has referenced anything specifically from Marvel TV’s MCU-adjacent universe. Until now, it’s been a one-way relationship, with the TV shows referencing the films, but the films ignoring the shows. That has led to questions about whether the events of the TV shows are canon to the MCU, even though Disney owns them all.

In 2013, ABC began airing Marvel’s “Agents of S.H.I.E.L.D.,” in which Clark Gregg reprised his role as Agent Phil Coulson from the films. Though the series was able to land to a few cameos from Cobie Smolders and Samuel L. Jackson in its first season, the MCU connections were a one-way street.

Despite Marvel TV chief Jeph Loeb’s often-stated assurance, “It’s all connected,” the connection between the films and TV shows often felt tenuous. “Captain America: The Winter Soldier” even introduced a conspiracy that seemed to threaten the premise of “Agents of S.H.I.E.L.D.”

Also Read: What's Next For Marvel After 'Avengers: Endgame'?

Maybe we shouldn’t even talk about the Netflix shows “Daredevil,” “Jessica Jones,” “Luke Cage,” “Iron Fist,” “The Punisher” and “The Defenders.” Though they take place in New York City, site of the climactic battle of the first “Avengers” film, they only occasionally mentioned people like “The Green Guy” or “The Guy With the Shield.” And of course, none of the big-screen heroes ever mentioned the street-level adventures of the Netflix heroes.

But you can expect much more synergy in the near future. Big-screen stars Bucky Barnes (Sebastian Stan), Falcon (Anthony Mackie), Loki (Tom Hiddleston), Vision (Paul Bettany), Scarlet Witch (Elizabeth Olsen) and Hawkeye (Jeremy Renner) are all coming to Disney+. Bucky and Falcon will pair off in their own series “Falcon and The Winter Solider”, as will Vision and Scarlet Witch in “WandaVision.” Loki will continue his mischief in his self-titled series, and a fourth featuring Renner’s Clint Barton training a new Hawkeye, Kate Bishop, is being developed.

The goal is to recreate the big-screen experience for home streaming, in a more cohesive way than the MCU ever did with ABC or Netflix. For starters, the Disney+ series are being led by Feige and Marvel Studios, rather than Marvel TV.

But at least Loeb can thank Jarvis for finally being proven right: It’s all connected after all.