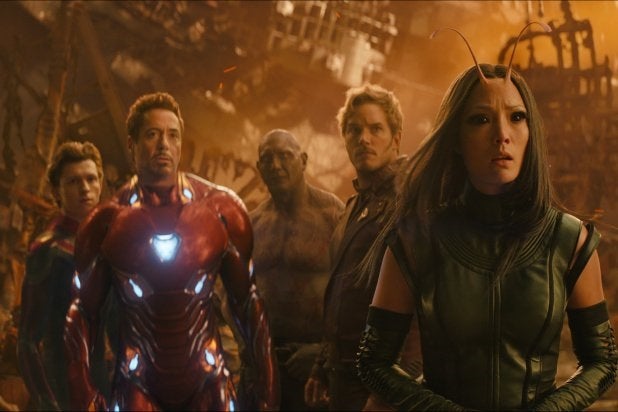 “Avengers: Infinity War” is off and soaring at the box office, with industry estimates putting the film’s opening day totals at $106 million from a whopping 4,474 screens. That makes Marvel’s massive anniversary crossover only the third film to gross over $100 million on opening day alongside “Star Wars: The Last Jedi” and “Star Wars: The Force Awakens.”

As has long been expected, “Infinity War” will become the sixth film in box office history with an opening weekend of over $200 million and the biggest launch ever for a superhero film. But at this range, comps are nearly nonexistent and estimates become less precise. The film is currently expected by industry estimates to finish the weekend with $235-$245 million, which would give it the second highest opening weekend in history.

However, “Avengers” still has a chance to beat the all-time record of $248 million set by “Force Awakens” if it continues to perform even beyond analysts’ sky-high expectations on Saturday. Disney is keeping their estimates a bit lower at $225-240 million.

Regardless, the enormous box office numbers for “Avengers” and February’s record-shattering “Black Panther” have now made Disney the fastest studio ever to gross $1 billion domestically in a calendar year at 117 days, 11 days faster than the studio reached the mark in 2016. Interest in the Marvel Cinematic Universe has resulted in “Black Panther” returning to the top five this weekend, bringing its domestic total to $685 million. The third film Disney has released this year, “A Wrinkle in Time,” also contributed $94 million to the studio’s 2018 total.

In the face of this competition, Paramount’s “A Quiet Place” and STX’s “I Feel Pretty” are expected to take a 50 percent drop from their totals last weekend. “A Quiet Place” will cross the $150 million domestic mark after making an estimated $10 million in its fourth weekend, while “I Feel Pretty” is expected to make just under $8 million in its second weekend after taking in $2.6 million on its second Friday. Warner Bros.’ “Rampage,” meanwhile, is looking at a drop of over 60 percent in its third weekend for a total of $6.5-7 million.