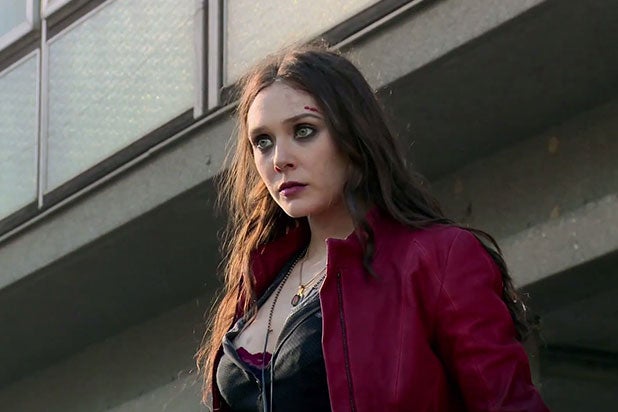 In a recent interview with Elle, Olsen, who plays Scarlet Witch in the film, reflected on her get-up for the “Avengers” films, suggesting that she wouldn’t mind a more modest version of her costume and saying, “I would like to cover up a bit.”

“It would just not be a cleavage corset. I like corsets, but I’d like it to be higher,” Olsen said. “Everyone has these things that cover them — Tessa Thompson does, Scarlett [Johansson} does. I would like to cover up a bit.”

The actress continued, “It’s funny because sometimes I look around and I’m just like — wow, I’m the only one who has cleavage, and that’s a constant joke because they haven’t really evolved my superhero costume that much.”

On the plus side, Olsen sees the film version of Scarlet Witch as an improvement on the character’s early comic-book incarnation on the costume front.

“But then you look at where it started in the comic books and it was a leotard and a headband so…oh, it’s horrible, it’s so horrible. So at least they know that’s not cool,” Olsen added. “But then they made Wonder Woman, you know? And that’s what she’s in. I think of the costumes and what we have to wear — it’s more about iconic images, because that’s what these movies are…. I think that’s the goal with the costumes, and it’s not representing the average woman.”

On the other plus side, Olsen gave Marvel props for making its superhero movie franchise inclusive.

“That’s why I like working with Marvel, because its almost like they’re not trying to slap anyone over the head with it, but they recognize that they have such a huge platform, and they’re using it to be as inclusive as they can with their storylines and representing the world,” Olsen said. “That’s why ‘[Black] Panther’ felt like such a huge thing in culture, and they’re aware of it, and their goal is to not make the same stories that have happened over and over and over again. I think that’s why the movies continue to be successful from a story and tone point of view.”

“Successful” might be an understatement; “Avengers: Infinity War” drew an astronomical $250 million in its opening weekend, a new record for the biggest box office opening of all time.