Wow, we’re just six weeks away from the cinematic superhero event of the decade, and the final trailer for “Avengers: Infinity War” has us chomping at the bit to see this thing go down. But this trailer is more than just awesome action — there’s lots of little details that can give us some big hints about what’s going to happen in this superhero team-up to end all superhero team-ups.

We previously dug into the first “Infinity War” trailer to see what information could be gleaned. Below you’ll find our observations from some of the key moments from the final trailer.

We know Thanos (Josh Brolin) has a lot of history with two major players from the “Guardians of the Galaxy” films — Gamora (Zoe Saldana) and her adopted sister Nebula (Karen Gillan). It looks like “Infinity War” will lay out more of Gamora’s childhood and her experiences with Thanos, judging by a brief shot of what looks like a flashback in which Thanos takes a young green girl by the hand.

Gamora and Nebula were taken at a young age and raised by Thanos, and in the first “Guardians” movies, they serve as his agents. Gamora first meets Peter Quill (Chris Pratt) while she’s trying to track down the Orb (which houses the Power Infinity Stone) for Thanos — but she’s really planning to steal it and betray him. She later fights Nebula, who hates her because Gamora was always Thanos’ favorite. The two sisters later reconcile their differences, at least to some degree, in “Guardians of the Galaxy Vol. 2.”

According to Gamora and Nebula, living under Thanos’ rule was a torturous experience that had them constantly fighting each other. Nebula’s cyborg appearance is a result of those fights (Gamora would always win, Thanos would replace Nebula’s body with robot parts to make her stronger). Since it seems like Gamora will be the character giving the Avengers the low-down on Thanos’ deal in “Infinity War,” we’ll likely be getting a sense of why he’s so scary from a flashback detailing her personal experience with the villain. 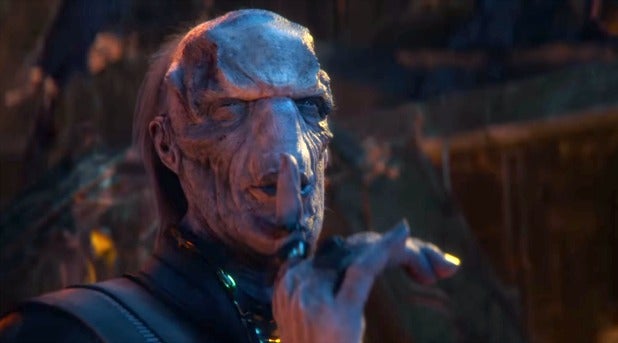 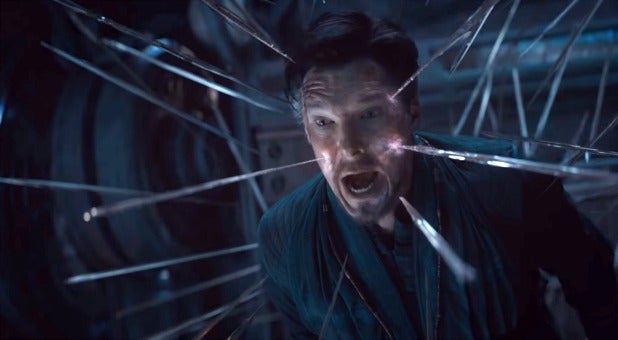 When Thanos comes to Earth hunting the Infinity Stones, he doesn’t come alone — he brings along the Black Order, a group of powerful lieutenants that help him wreck planets and conquer stuff. A new one of those powerful baddies shows up in the new “Infinity War” trailer, where he’s seen torturing Dr. Strange (Benedict Cumberbatch). It looks to be Ebony Maw, an alien who isn’t much of a fighter, but whose intelligence and abilities more than make up for it.

In the comics, Ebony Maw has the power to manipulate people and bend them to his will using his powers of persuasion, merely by talking to them. The effect is pretty powerful. He even manages to make Dr. Strange work for him in the comic story, before later erasing Strange’s memory so he has no recollection of helping Maw carry out his plans. The trailer shows Maw torturing Dr. Strange, who we know is in possession of the Amulet of Agamotto, the time-bending artifact that houses the Time Infinity Stone. So Maw might be trying to get the stone from Strange — or he could be working his mind-control abilities on him.

For more about Ebony Maw and what he might be up to with Doctor Strange, check out our breakdown of the character. 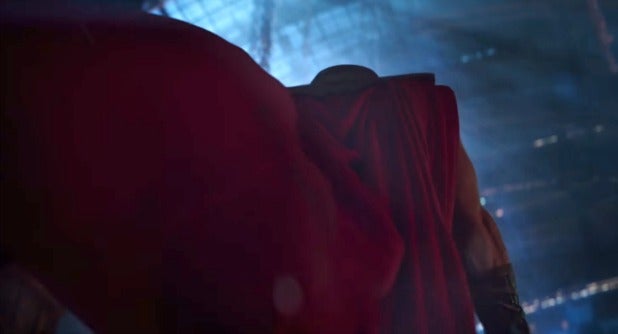 So, okay, we aren’t totally sure what’s going on here, but there are three (!) main heroes who wear a cape like that: Doctor Strange, Thor and Vision. Best guess for this is Vision, since he has an Infinity Stone on his head — making it a prime target for Thanos. Could Thanos actually manage to succeed in stealing the Mind Stone from Vision, only for Vision to stubbornly not die?

Captain America can hold his own in a fistfight with Thanos

This is kinda wild. We, of course, knew that Captain America (Chris Evans) was really, really strong, but strong enough to be able to keep the Mad Titan Thanos from punching him in the face? We’re very worried the next part of that scene is Cap getting crushed to death. 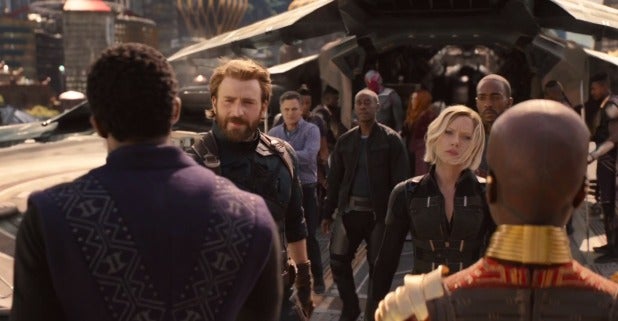 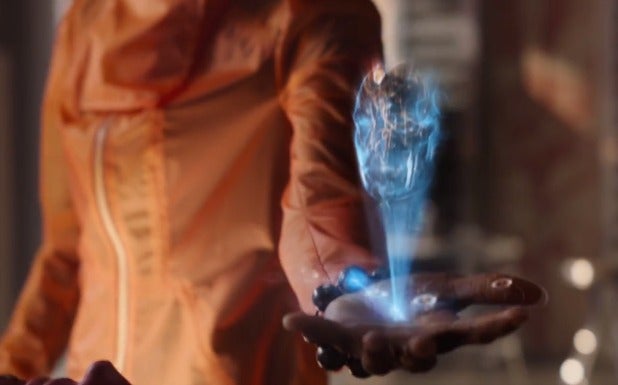 There’s a part in the trailer where Tony Stark (Robert Downey Jr.) is describing a plan to try to play keep-away with the Infinity Stones so Thanos can’t get them. While Captain America and Black Widow (Scarlett Johansson) visit Wakanda, Shuri (Letitia Wright) looks at a hologram that shows a floating disembodied head, belonging to Vision (Paul Bettany) — which also contains the Mind Stone.

So is the big battle in Wakanda going to happen because they’re hiding one or more of the Stones there? The nation’s technological superiority makes it the best place for such a plan, anyway.

Loki in trouble — or on the wrong team 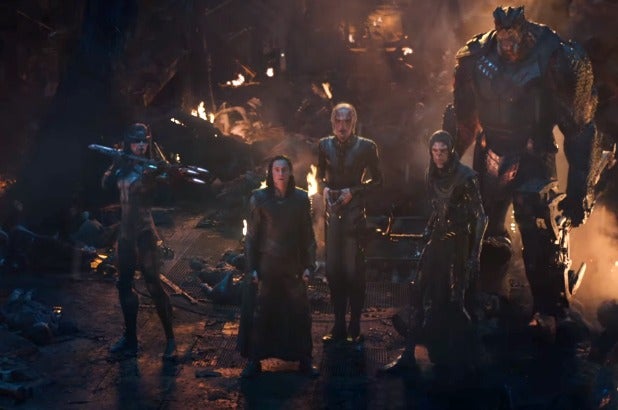 In the final trailer, Loki is standing with Thanos’ powerful group of lieutenants, the Black Order, and it’s not clear if he’s a prisoner (it looks like the Black Order member that appears to be Proxima Midnight has her weapon trained on him) or if he has switched sides.

Both are possible. The trailers for “Infinity War” have all but confirmed what fans suspected at the end of “Thor: Ragnarok”: When Thanos comes calling after the Asgardians escape the destruction of their planet, Loki (Tom Hiddleston) hands over the Tesseract, the powerful artifact from “The Avengers” that houses the Space Infinity Stone. Loki previously worked for Thanos in “The Avengers” — it was Thanos’ army of aliens Loki brought to Earth, and Thanos who provided Loki with his mind-controlling scepter, which later turned out to house the Mind Infinity Stone.

From the look of the trailer, Loki might be taking up a spot among the Black Order in “Infinity War” — at least temporarily. Loki went through some big character changes in “Thor: Ragnarok,” so it seems just as likely that he’s biding his time and pretending to work for the bad guys.

We know that Thor manages to escape from Thanos before teaming up with the Guardians of the Galaxy. And we can presume that happens before the Guardians get to Earth, which would mean that in the intervening period they have an adventure of their own involving, as we see in this trailer, a visit to what looks like an old abandoned ship.

Notably, we have not seen Thor on Earth in either of the “Infinity War” trailers, so this must be a substantial side trip. Maybe Thor will die there? We think, by the way, that the shot from the trailer of Thanos squeezing Thor’s head is from before Thor escapes from the ship that he, Valkyrie and Loki fled Asgard on at the end of “Thor: Ragnarok.” But who knows?

Is that Hulk in the Hulkbuster suit? 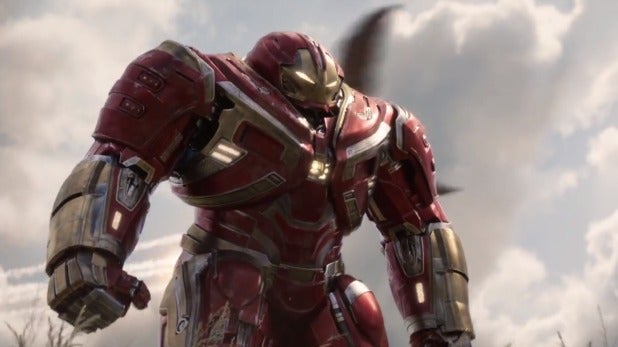 Though we did see Bruce Banner (Mark Ruffalo) near the beginning of this trailer, we still have not seen the big green guy in either of these trailers. Or did we? The Iron Man Hulkbuster suit is a weird anomaly in the battle in Wakanda because there’s seemingly nothing there that would warrant it over any other Iron Man suit. Also, that shot of Banner we mentioned earlier also had Black Widow and War Machine in it — coincidentally, those two are also in Wakanda in “Infinity War.”

So our thought, at this point, is that the Hulk is actually wearing that Hulkbuster suit himself. Which is awesome. 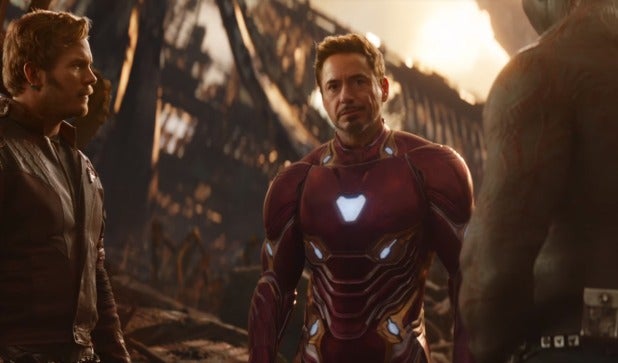 Iron Man, meanwhile, has a weird looking new suit of his own that looks kind of like a muscle suit. And he’s got some kind of rocket platform attached to it. It’s probably just a curiosity, but it’s worth noting. Since Tony previously had trouble taking his suit into space, maybe this new design is meant to deal with that problem better than his sub-orbital suit, briefly shown in “Iron Man 3.”

It would be a tough task to fit every single major character in “Infinity War” into a trailer, but this thing nearly pulls it off. There are a few key names absent here, and while the previous trailer picked up some of the slack, there are still seven important characters we have not seen in either of them. They are: Ant-Man (Paul Rudd), Nebula (Karen Gillan), Hawkeye (Jeremy Renner), Nick Fury (Samuel L. Jackson), Valkyrie (Tessa Thompson), Heimdall (Idris Elba) and the Collector (Benicio del Toro). Nebula, at least, makes an appearance on the new poster, and Elba and del Toro are listed among the cast on that poster, even though they’re not seen in the artwork.

That leaves Ant-Man, Hawkeye, Valkyrie and Nick Fury as major question marks. They do get mentions on the IMDb page for “Infinity War,” though, so it seems we should expect them all to pop up at some point.

Tracking the Infinity Stones of the Marvel Cinematic Universe, Through 'Black Panther'

As every Marvel movie fan knows, the thread that connects the entire Marvel Cinematic Universe from Earth to Xandar are the six Infinity Stones that will all come together when the Marvel heroes take on Thanos in "Avengers: Infinity War." Starting with "Captain America: The First Avenger," the Stones have been revealed one by one since 2011. If you need a brush-up on where each stone currently is and what it can do, we're here to help you out. (WARNING: Spoilers for "Black Panther" ahead)