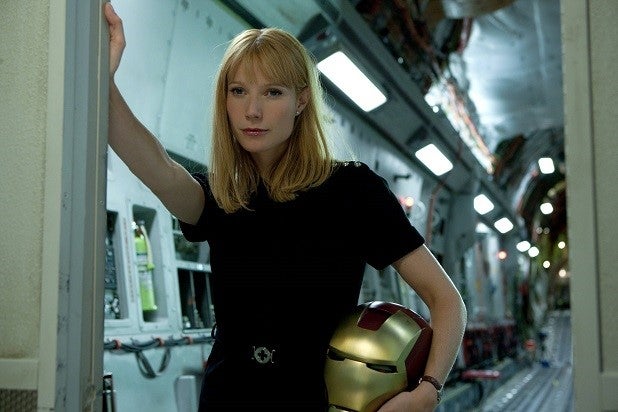 Early in “Avengers: Infinity War,” before the whole deal with Thanos trying to kill half of the universe with the Infinity Stones gets going on Earth, Tony Stark and Pepper Potts talk about having a baby.

Eagle-eyed Twitter user ashley__renae tweeted a photo of an excerpt of what she says is an interview with Gwyneth Paltrow,  who plays Potts in the Marvel Cinematic Universe movies, in “Marvel’s Official Avengers: Infinity War” magazine. Marvel did not immediately reply to a request for comment.

As CBR reports, in it, Paltrow describes the growth of the relationship between Potts and Stark (Robert Downey Jr.), which grew from Potts working as Stark’s assistant, to taking over Stark Industries as CEO, and finally becoming romantic (and a bit rocky) over the course of 10 years of MCU movies. In “Infinity War,” the pair are finally taking the next step by getting married — although Tony’s involvement in the fight to stop Thanos (Josh Brolin) might have an effect on that.

In the interview, it’s Paltrow’s use of the present tense when talking about the later stages of their relationship that has fans thinking she might have confirmed what’s next for her character and Tony Stark.

so i found this infinity war magazine today that had interviews with the cast and excuse me gwyneth but pepper and tony don’t have a child?????? pic.twitter.com/3wspv5fsb7

“Pepper and Tony have had a really long journey together,” Paltrow said in the interview. “She obviously starts as his dutiful assistant, and then the relationship evolves, and now this decade later they’re married, and they have a child. Their relationship has evolved in all of the ways that great romances evolve.”

@ashley_renae late tweeted another photo of the whole page:

of course! here you go! pic.twitter.com/ORu04jd8bT

Some fans are thinking this means “Avengers 4” will be set years after the events of “Infinity War,” which seems like a leap. It sounds a lot more like Paltrow, talking about the last decade of MCU movies, is confirming that she and Tony are going to have a baby, something that’s not in “Infinity War.” In that movie, Tony and Pepper are planning their wedding, and early in the movie Tony tells her about a dream he had in which she was pregnant. It was so real, he says, that he’s convinced it has to be true, but Pepper denies it. This quote suggests that there might be something to his dream after all.

Then again, Paltrow’s discussion of Tony and Pepper already being married when they aren’t in “Infinity War” could mean the story changed at some point. Since “Infinity War” left the Thanos situation unresolved, it seems unlikely that Tony and Pepper would stop to have their wedding. Then again, this could suggest something of a time skip forward. And Tony’s suggestion they name the future kid Morgan could be portentous, too — there’s a Morgan Stark in the comics, although he’s Tony’s cousin, not son.

If there’s a baby on the way in “Avengers 4,” though, that could confirm some potential theories about where the MCU is headed in the future. At the very least, it would provide Tony a good reason to retire from superheroing, which seems likely since Downey’s MCU contract ends with “Avengers 4” in 2019. If he hangs up the Iron Man suit to become a family man, that would allow Marvel to keep Tony around for occasional cameos and assistance in the MCU — and that feels more likely than killing the character off.

It would also provide a potential heir for the Iron Man mantle somewhere down the line, too.