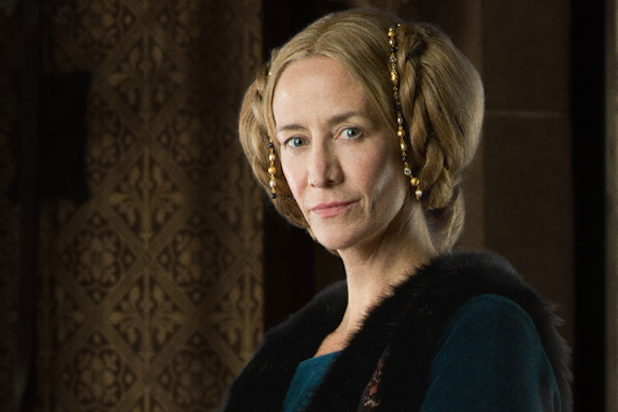 We don’t know much at all about “Jessica Jones” Season 2 but now we have our first additional cast member.

Award-winning actress Janet McTeer has been cast in an unnamed role in the Netflix show’s second season, TheWrap has learned.

“We are so fortunate to have an actress of Janet’s talent and stature join what is already an incredible cast,” said Marvel’s Head of Television Jeph Loeb in a press release.

The statement doesn’t give us much else in the way of hints for her character. We do know that she’ll be playing a key role, or at least key to what “Jessica Jones” Season 2 is trying to create in its upcoming season.

“Our second season of ‘Marvel’s Jessica Jones’ aims to capture what audiences loved about our first, and Janet will be key to achieving that goal,” Loeb continued.

McTeer is a two-time Oscar nominated actress — for “Tumbleweeds” and “Albert Nobbs” — and has won a Tony and a Golden Globe. She recently starred in the mini-series “The White Queen,” the final season of “Damages,” and in the Emilia Clarke romantic tearjerker “Me Before You.”

Other Marvel and Netflix executives praised McTeer’s talent and “gravitas,” noting that she’ll be a great addition to the cast alongside the already “fearless” Krysten Ritter as Jessica.

“Her gravitas and authenticity are the perfect ingredients for all we’re trying to create this year,” series creator and executive producer Melissa Rosenberg said. “She disappears into roles, gives her characters extraordinary dimension and depth. We’re incredibly fortunate to be able to collaborate with her.”

Netflix and Marvel are keeping the second season a mystery, probably so that nothing is spoiled for “The Defenders.” However, we do know that, according to Rosenberg, all the episodes in Season 2 will be directed by women. The show was praised last season for its portrayal of sexual abuse and for having a number of women working behind the scenes.

Jessica Jones will be on screen next in “The Defenders” — Netflix’s superhero team-up that finally brings together Jones, Daredevil, Luke Cage, and Iron Fist. It was recently announced that it’ll premiere on Aug. 18. There’s been no release date announced yet for “Jessica Jones” Season 2.

7. "One Day At A Time": If this song doesn't make you want to get up off the couch and dance around, we don't know what will. Plus, props to Netflix for amping up the original title song but keeping it close to the 1970s original.
View In Gallery