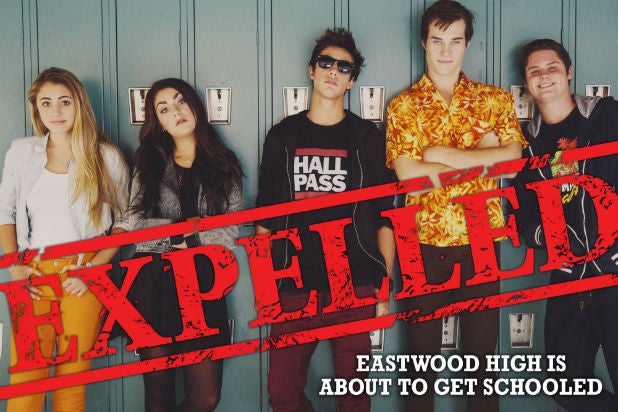 The comedy will challenge the traditional distribution model, debuting in theaters on Dec. 12 before quickly moving to the Internet and video-on demand by the end of the month. The film stars a who’s who of YouTube and Vine stars like Cameron Dallas, Andrea Russett, Lia Marie Johnson, Marcus Johns, Michelle Glavan, Teala Dunn and Matt Shively.

“The movie industry is changing in terms of not only who teens want to see on screen, but also how, when and where they want to watch,” said Brian Robbins, “Expelled” producer and founder of AwesomenessTV. “‘Expelled’ gives fans of this new generation of stars a chance to see them on the big screen…or whatever screen they prefer.”

The film follows Felix (Dallas) a legendary prankster who charms his way out of trouble. After his third strike at school, the principal has had enough and expels him. Never defeated, Felix resorts to his infamous ways and devises a plan with his brother (Johns), best friend (Shively), new friend (Johnson) and classmate (Russett) to convince his parents he’s a stellar student.

The film will initially debut in theatrically in New York, Los Angeles and Chicago before quickly moving to on-demand at ExpelledMovie.com and through iTunes, Google Play, Amazon, Target Ticket, and Walmart beginning Dec. 16. The film will hit video-on demand on Dec. 30.

AwesomenessTV has been rapidly expanding beyond its online platform. The company recently announced that it will produce a live action series for based on the “Richie Rich” IP.  The half-hour comedy will consist of 21 episodes featuring the richest kid in the world, to be played by “Dark Skies” actor Jake Brennan, and will debut in early 2015 for Netflix members in the US, Canada and Latin America.