Comedy Central released the trailer for the second season of Awkwafina’s family comedy, “Awkwafina is Nora from Queens,” on Thursday.

Creator and writer Awkwafina (“Shang-Chi and the Legend of the Ten Rings,” “The Farewell,” “Crazy Rich Asians”) stars as the series’ titular character, as the show was inspired by her real-life upbringing in Queens. Raised by her dad (played by BD Wong) and grandma (Lori Tan Chinn) and alongside her cousin (Bowen Yang), Nora Lin relies on her family as she navigates life and young adulthood in NYC, per Comedy Central’s description.

The Season 2 trailer shows everyone’s favorite Queens native back at her antics, as she dons crazy disguises, deals with her dad’s increasingly serious relationship, gets a job at a CBD store, gets proposed to and much, much more. 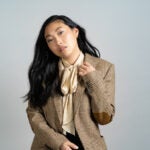 “Awkwafina is Nora from Queens” is created by Awkwafina and Teresa Hsiao and executive produced by
Awkwafina, Karey Dornetto, Teresa Hsiao, Lucia Aniello, Peter Principato and Itay Reiss of Artists First. Sean Fogel serves as the producer with Justin Rosenblatt and Andrew Lutin as executive producers. Tara Power
is the executive in charge of production for MTV Entertainment Studios.

The second season premieres with two back-to-back episodes on Comedy Central on Aug. 18. Watch the trailer here or above.