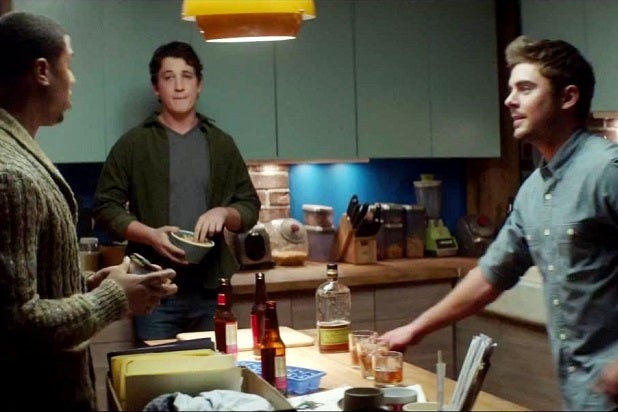 This weekend’s opening of “That Awkward Moment” will provide a box-office heat check for young stars Zac Efron, Miles Teller and Michael B. Jordan.

They’ll do just fine and knock “Ride Along” out of the top spot it’s held for the past two weekends, say analysts. They project an opening in the $15 million range for the R-rated romantic comedy from Focus Features.

That’s about double the expectation for Paramount’s Jason Reitman drama “Labor Day,” the weekend’s other wide release, which stars Kate Winslet, Josh Brolin and Gatlin Griffith. “That Awkward Moment” will be in 2,809 theaters, while the PG-13-rated “Labor Day” will be in about 2,500.

Both movies primarily target female moviegoers, which is not surprising since Sunday’s Super Bowl is expected to divert the attention of much of male America. It’s not impossible for a movie to break out at the box office on this weekend, but it isn’t easy, because movie attendance typically plunges on game day.

Also read: Touchdown! How Movies Can Score at Box Office Even on Super Bowl Weekend

With Efron, Teller and Jordan front and center in a movie about dating, the target demographic for “Awkward Moment” is young women.

“These guys definitely aren’t A-list stars now, but give them the right couple of movies and they could be someday,” said BoxOffice.com vice-president/chief analyst Phil Contrino. “This one won’t make or break them, but it could help.”

They all have major projects coming up. Efron will star in the Seth Rogen comedy “Neighbors” in May, while next up for Teller is “Divergent,” set for release on March 21. Jordan is expected to play the Human Torch in next year’s “Fantastic Four’ reboot.

Efron is due for a hit. “The Lucky One” earned nearly hit $100 million worldwide in 2012 for Warner Bros, but the former Disney Channel star has been in four forgettable indie outings since, most recently “Parkland” and “At Any Price.”

This is Jordan’s first film since drawing raves for his performance in “Fruitvale Station,” an indie that has brought in $16 million for the Weinstein Company. Before that came 2012’s “Chronicle,” a low-budget sci-fi thriller that made $126 million globally for Fox.

Teller was last seen opposite Shailene Woodley in the Sundance hit “The Spectacular Now,” which failed to break out last summer. Before that, he was in “21 and Over,” a low-budget teen comedy that brought in $45 million for Relativity.

Tom Gormican wrote and makes his directing debut on “That Awkward Moment,” which was developed by What If It Barks Films and acquired by Peter Schlessel’s Film District prior to its absorption by Focus. Imogen Poots, Mackenzie Davis and Jessica Lucas co-star.

Also read: ‘That Awkward Moment’ Review: All the Man-Child Rom-Com Clichés, Plus a Nearly-Nude Zac Efron

The early reviews have been weak, but “Awkward Moment” looks strong on social media. Its Twitter mentions are running ahead of “Warm Bodies,” the zombie rom-com that opened at No. 1 with $20 on last year’s Super Bowl weekend.

The production budget was around $8 million and Focus picked it up for $1.5 million, so it looks like it will be a financial winner.

“Labor Day,” from Paramount and Indian Paintbrush, is looking at an opening between $6 million and $8 million.

Reitman directed and wrote the screenplay, which is based on a novel by Joyce Maynard. A single mom (Winslet) and her son (Griffith) offer a wounded man (Brolin) a ride. As police search town for an escaped convict, his real story comes to light. Tobey Maguire co-stars.

Lianne Halfon, Russell Smith, Reitman and Helen Estabrook are the producers on “Labor Day,” which was executive produced by Steven Rales, Mark Roybal, Michael Beugg and Jeffrey Clifford. The production budget was $18 million.

The weekend’s wild card is “Frozen.” Disney is releasing a sing-along version of its animated blockbuster in 2,057 theaters Friday, or most of its 2,754 locations.

It was the top seller for online ticket broker Fandango on Wednesday, but even Disney’s head of distribution Dave Hollis wasn’t sure how the weekend would go.

“It’s hard to pinpoint, because there’s not a lot of history to track on sing-along versions of animated movies going into their 11th week,” he said.

Meanwhile, Warner Bros. is re-releasing director Alfonso Cuaron’s 3D “Gravity” in 330 Imax theaters this weekend. The Sandra Bullock-George Clooney space epic has been in more than 1,200 theaters for the past two weeks since it’s re-release after the Oscar nominations.

On the specialty circuit, Anchor Bay is rolling out the Andy Garcia-Vera Farmiga college romance “At Middleton” in 18 theaters.