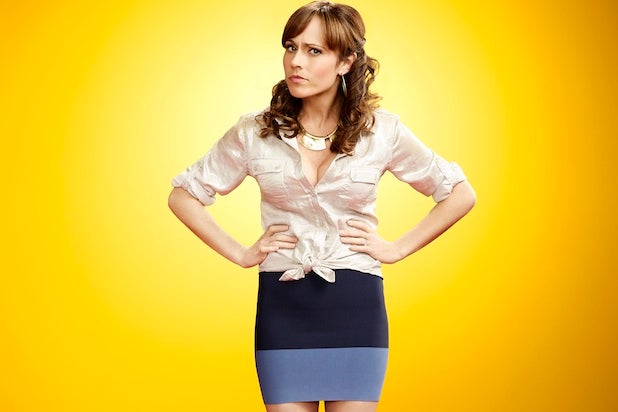 “Is it a funny storyline? Not necessarily, although our writers have done a great job with making this serious storyline that we are delving into comedic,” she continued. “They’ll go there, they’ll go to the serious places, they’ll go to the tears and then they’ll flip it on it’s head and turn it into something funny, which is what I think is so endearing about the show.”

Jenna is always finding herself in a love triangle that throws everyone into a tailspin. This season, Matty (Beau Mirchoff) got the girl, but then Colin (Nolan Gerard Funk) became Jenna’s temptation du jour. Now, Jenna seems to be heading into a downward spiral.

TheWrap: We see trying times ahead. What can you tell us about what’s to come?
Nikki DeLoach: What I can tell you is that Jenna, like in life when we are growing up, there are a lot of questions that we ask ourselves: “Who am I? Where am I going? What is my purpose in this world?” What I think is that Jenna makes a lot of mistakes down these paths of questioning that she goes down. And I think that at the end of the day it’s not about the mistakes that you make — and this is kind of the lesson that I want our viewers to learn, especially our younger viewers — instead of the mistakes you make, it’s the way that you recover and you rebound from those mistakes that actually really matter. And that’s why I think that this storyline, where we’re taking our lead character Jenna, that’s why I think it’s so important. It’s a really really, really truthful, honest, story to tell.

It definitely feels like a parents’ nightmare.
Listen, I’ve been down the dark path myself and I’m sure my parents were sitting there on the sidelines going, “What has become of our daughter?” It almost seems like it happened over night, you just immediately start making different choices in your life and you think that you’re being independent and you think that you’re finding yourself. And in a way you are, and then you come out on the other side a bit of a changed person, and it is a parent’s nightmare! I think the parent’s nightmare is to have to stand in front of their daughter and have to make the choice of if you decide to do this to yourself then you’re on your own. That is a parent that has tried everything else and doesn’t know what else to do at that point in time.

In the trailer, Lacey tells Jenna to leave. How does Lacey deal with that decision?
Well, I think she goes — this is a little bit of a tease because we actually haven’t talked about this — she kind of goes back and forth, “Have I done the right thing? Have I done the wrong thing?” They have that actual real conversation in the Hamilton house kitchen: “Did we do the right thing? Did we not? Oh my god, what if she’s out there somewhere, what if she’s out on the sidewalk somewhere.” I think that’s a really real conversation that every parent has at one point in time. When your daughter comes back to you or when your son comes back to you, only then will you be able to know if you did the right thing or not, and that is what makes it so scary. In that moment you just try to do your best and you don’t know if your best is good enough.

The show’s creator, Laura Ungerich, has been replaced as its showrunner starting next season. She was very fond of your character and you. What can you expect without Laura around?
Obviously that was a concern of mine, too. First of all, Lauren created such an amazing show, wonderful characters and the way that she always took care of Lacey, and the relationship between Lacey and Jenna, as an actress and a person I could not ask for more. It was definitely a blow to hear that she was going to be leaving and not coming back for the fourth season. But that said, I had the opportunity to sit down with our new showrunners and they really seem to have a big grasp about the importance of the mother-daughter relationship. I haven’t seen any scripts yet for Season 4 or any specific storyline, but the two of them seem to understand how important that relationship is to the show. And that made me really happy and made me feel pretty confident that we will be able to pick up where we left off.