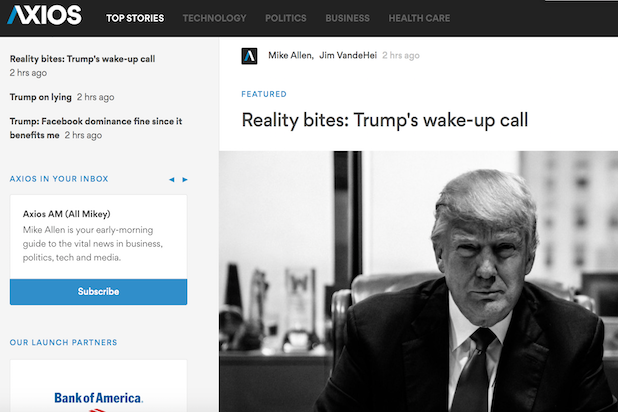 The people behind Politico have launched a new website that aims to transform the way we consume news. And they landed an interview with President-elect Donald Trump on Day 1.

“We’re probably the only not-yet-launched outlet to ever get a presidential interview,” Axios co-founder and president Roy Schwartz told TheWrap. “We’re super excited about that.”

Mike Allen, Jim VandeHei and Schwartz changed the way politics were covered when Politico launched back in 2007 and the trio has similar expectations for Wednesday’s launch of Axios.

Schwartz is the former chief revenue officer of Politico and left the company in 2016 to help start a new venture that eventually became Axios. Allen, VandeHei and Schwartz had been with Politico for about a decade and spent a lot of time talking to people about the way they consume news when the concept for Axios emerged.

“If you think about that 10-year period, we didn’t have social media when we launched Politico. That was the beginning of Facebook and Twitter, definitely before, obviously, Snapchat and Instagram,” Schwartz said. “A lot of things had changed during that time.”

Schwartz explained that a few themes often came up when exploring how news is consumed that resulted in Axios.

“People felt overwhelmed by the amount of news and information that was out there. So much news, so many emails to read, so much social media. It just felt overwhelming,” Schwartz said. “We picked up on the change in people’s habits and attention span. Literally, our brains have been rewired where we tend to read only the beginning paragraph or two of an article.”

The change in behavior forced Allen, VandeHei and Schwartz to ponder different ways to write.

“You can try to get people to read an 800-word article, or a 1,000-word article, or you can be a reader first and write the way that they want to consume,” Schwartz said. “We developed a concept of smart brevity, where we write an item much shorter — that way you can quickly read it and decide if you want to read more.”

Axios does just that, offering a headline, photo and a few sentences on each story in a Facebook-like news feed format that is mobile friendly and fits on one screen. The Axios website is so friendly to mobile devices that Schwartz said an app isn’t necessary, the actual website is designed for mobile consumption.

“Everything is very short, we pull out the critical items,” Schwartz said. “Traditionally, if you were writing at the New York Times or the Wall Street Journal, you couldn’t write a piece less than 800 words even if you only had one interesting quote. So you had to write around it. Here on this site, the way we are doing this news stream… it’s much more like Facebook with nothing but news.”

Axios does not have a homepage and Schwartz said this allows them to publish a simple quote “without having to spend 800 words doing it.”

“We also have this concept where you can keep reading but only if you want to,” he continued before explaining that the “keep reading” button doesn’t take you anywhere, it simply expands the article right on the same screen.

“You always know where you are because there is no article page, there is no home page,” he said.

Axios even tells readers how many words to expect if they chose the “keep reading” option. Axios will also have a major presence on various forms of social media, including Facebook and Snapchat.

“We’re reader first so I don’t mind if you don’t come back to our site, as long as you consume our content and get to know our brand,” Schwartz said.

Schwartz likes to compare Axios to a combination of Twitter and The Economist and said that 140 characters isn’t always long enough to capture a story or a thought.

“We’re able to do it in one screening we’re able to give people the ability to read more, so I think in that sense we’re similar to Twitter that we’re short, brief and you can get smart quick. The other thing is we have a stream, so it’s similar to Twitter in that it’s presented in a stream,” Schwartz said. “I said The Economist because, I think if you went back 40 or 50 years ago, The Economist was that thought-leader publication that covered politics, business and technology. We cover those things and we cover them, I think, in a very smart and modern way.”