Two years ago music mogul Irving Azoff told the world he and his management company Front Line Management were "honored” that Axl Rose had “placed his trust in us" to represent him and Guns’N’Roses.

That was then. On Thursday, Front Line filed a lawsuit in L.A. County Superior Court, claiming that Rose and GNR owe the company more than $1.8 million under their management agreement.

The suit also asks for a full accounting of Rose to determine what other funds Front Line might be owed. 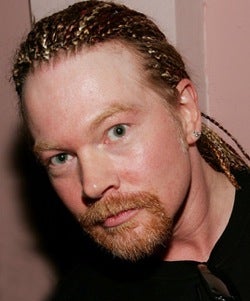 The suit alleges not only that Rose owes Front Line money for services as "artist’s manager," but that the singer committed "fraud" and "an abuse of corporate privilege" with "shells … through which Rose has at all times material herein carried out his business."

The suit states that Rose, GNR and 10 as yet unnamed defendants breached an “oral agreement” by "failing and refusing" to pay a 15 percent commission on “in excess of $12,470,000 in monies that defendants received and/or earned on connection with performances in Taipei, Seoul, Japan, Canada and South America."

As well as being the longtime manager for the Eagles, Azoff handles superstars such as Van Halen, Miley Cyrus and Christina Aguilera.

After the purchase of Front Line by Ticketmaster in October 2008, Azoff also became the chairman and CEO of the giant ticket sales company, where he was one of the architects and leading proponents of the merger with promoter Live Nation.

As lead singer for one of the most successful hard-rock acts of all time, Rose has long held a reputation for doing things to the beat of his own drum. That lead to guitarist Slash and every other original member of GNR leaving the band by the mid-1990s.

After the band’s 1987’s multi-platinum "Appetite for Destruction" debut and 1991’s double "Use Your Illusion" albums, Rose and the newly refurbished GNR wouldn’t release another record of original material until the 13-years-in-the-making "Chinese Democracy" in late 2008.

The new version of GNR has toured several times since 2002 and is currently performing in South America, after having played in Asia and Canada earlier this year.

Rose announced on Twitter on Feb 16 that "Guns is now managed by Doc McGhee n’ we’re off to a fun start." McGhee previously managed Bon Jovi on its rise to stardom in the late 1980s, as well as handling Motley Crue during its early years; he still manages KISS, among other artists.

Neither Rose nor McGhee responded to TheWrap’s requests for comment.