June Havoc’s passing touches all of us ever moved by the achingly poignant Gypsy Rose Lee story.

No need to recapitulate the tale of a world-famous mother of all mothers and her tormented relationship with herself, her daughters and all who spun in her orbit. We’re all familiar with the songs, tribulations, triumphs and trajectory of Big Mama’s manipulations and bumpy journey through Hollywood lore.

This small reflection is simply a fond nod to Havoc’s triumph through adversity and struggles to find a meaningful place in the world. 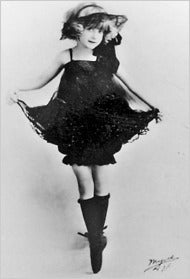 Not easy when her mother was a bull-headed careerist determined to find that ever-elusive spotlight. But enough about the matriarch of her family.

Baby June (left, as Dainty June) will forever be that curly-topped, toe-tapping moppet in our hearts and memory, thanks to the wonderful Rosalind Russell and colleagues who brought the tale to film and stage. Not to mention Patti LuPone and Bernadette Peters, who stormed the Broadway stage.

Even though her talented “Gypsy” sister broke out as the family’s money-maker and booty-shaker, Havoc etched her legacy in Hollywood history as America’s darling girl, if not the greatest actress of her day.

No matter. She will forever be the linchpin connecting our collective recall of a simpler (if not kinder) time when vaudeville and burlesque reigned supreme until entertainment forces shifted gears.

As we hurtle into 3D and blue-skinned civilization, the forces shift again into the future. What’s next, we may wonder? Only James Cameron, George Lucas or Steven Spielberg may know.

Your guess is probably better than mine and I know better than to suggest what will be. I’m still figuring out how to use my new cell phone, so the technological advances in film works are way over this Luddite’s head, better left to the experts.

All I know is Baby June abides.

We hear you singing, June, loud and clear.