If you thought Baby Shark was just an adorable animated character accompanied by an alarmingly catchy theme song, think again. A fisherman in Indonesia has caught a real-life baby shark that looks eerily similar to the viral YouTube sensation.

Abdullah Nuren was fishing with his brother near Rote Ndao in the East Nusa Tenggara province when he accidentally caught an adult shark in his trawler net. After hauling it in, Nuren cut open the shark’s stomach, where he found three pups. Among them was one with two massive eyes just below its snout, giving it a distinctly human-like appearance.

Fair warning, Baby Shark’s catchy song may have been a certified earworm, but this baby shark may truly haunt your dreams. 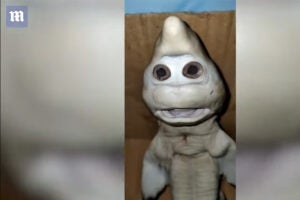 The pup immediately drew comparisons to the animated Baby Shark, who also has two large, round eyes just above his mouth, instead of on either side of his head. Nuren took the baby shark home to his family in order to preserve it. According to the DailyMail, he said he’ll be keeping the pup in his home even though he has neighbors who have offered to buy it.

“My home has been crowded with people who want to see the shark” he said. “Many people want to buy it, but I will preserve it instead. I think it will bring me good luck.”

Surprisingly, this isn’t the first mutant shark to be found off the coasts of Indonesia in recent years. Last October, fishermen in the Maluku province caught an albino, cycloptic shark pup. Similarly, that pup was one of three found in the mother, who had accidentally gotten caught in the fishermen’s nets.

It’s unclear what caused the odd placement of the eyes in the shark pups.