The "Bachelor" contestant accused of having an affair with a producer who was fired last week over the matter says she didn’t have sex with the staffer, and that she feels "betrayed" by the ABC reality show. 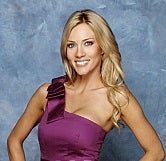 Asked whether there was an inappropriate relationship, Rozlyn Papa (pictured, left) told ET  "absolutely not. No. … I made good decisions. I did not choose to have sex with someone else."

Papa, a 28-year-old model and makeup artist, spoke with Entertainment Tonight before Monday night’s episode, during which she was asked to leave by host Chris Harrison.

During the episode, other contestants describe the affair as a "sexual relationship."

"I absolutely feel betrayed by the show," Papa said. "They want the ratings, and that’s what they’re getting. At what point does somebody say that this show’s ratings are more important than my life?"

"The Bachelor" himself, Jake Pavelka, also told ET that there’s truth to the story, but didn’t elaborate other than to say he heard it from the other contestants.

Harrison was adamant that the show was in the right.

"It’s unfortunate, but the truth is completely on our side," Harrison said. "It was an inappropriate relationship … a line was so drastically crossed, without a doubt."