(Spoiler alert: Please do not read on if you haven’t watched Monday’s “The Bachelor” Season 21 finale.)

Nick Viall finally chose the woman he wants to spend the rest of his life with on the Season 21 finale of “The Bachelor.”

And the lucky lady is … Vanessa Grimaldi.

Viall, the two-time “Bachelorette” runner-up and “Bachelor in Paradise” contestant, got down on one knee and proposed to Grimaldi during the finale of ABC’s “The Bachelor” on Monday night after a long season of tears, cat fights and heart-breaking goodbyes.

See Video: 'Bachelor' Host Warns Nick Viall Could Be First in Show's History to Be Ditched

“I’m not fighting it any longer,” he told his beloved after breaking the heart of Raven Gates (he left in the snow without even putting her coat back on). “When I look at you, all I see is the future.”

“Nick, when I am with you, I am the happiest I have ever been,” she said tearfully. “So thank you for taking a second chance on love … I promise to thank you every day for how happy you make me.”

The bride-to-be accepted his proposal, Neil Lane engagement ring and final rose … well, we think she did, but it was hard to understand what Vanessa was saying through her happy sobs. 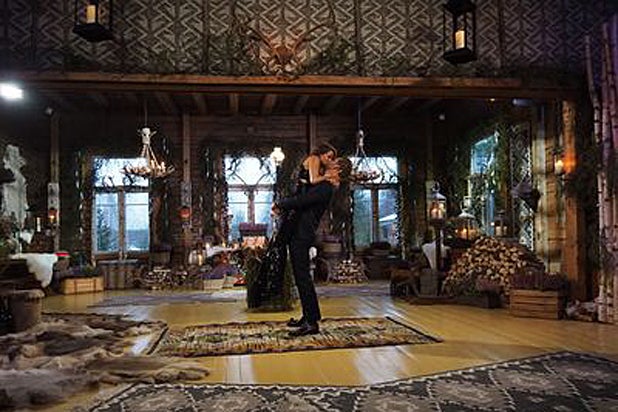 Leading up to the finale, many viewers were torn about the woman Viall would pick: Grimaldi, the 29-year-old Canadian who often questioned Viall’s motives and kept him on his toes, or Gates, the 25-year-old boutique owner from Arkansas who opened up to Viall about her past relationships and who had physical chemistry with the “Bachelor” alum.

After all, Grimaldi, in the preview for this week’s episode, said she’s not “sure if I’m ready for that proposal, because things shifted for me,” after she told Viall she wasn’t comfortable with just accepting the final rose just because her relationship with Viall would potentially be a tiny bit stronger than his relationship with another woman.

Also Read: How Social Media Changed 'The Bachelor' for Better - and Worse

Before handing out his final rose, Viall took the women on their final dates as he prepared for his proposal, as well as talking to his parents over which woman he feels more of a connection with.

Also Read: How Social Media Changed 'The Bachelor' for Better - and Worse

In a sneak peek leading up to the finale, Viall said, “I’ve been falling in love with her for a very long time. I feel like sometimes I’ve been fighting it and I’m not fighting it any longer,” without revealing which woman he was talking about.

He later praised Gates for her sincerity, “when you first told me you were in love with me, I felt every word … not just the ‘I love you,’ but every word leading up to it,” he said.

Raven revealed in her final speech, “I couldn’t be more sure that I love you,” but sadly Nick told her, “I don’t know if I am in love … my heart is somewhere else.”

Meanwhile, Grimaldi had said that since her last date things had shifted from wanting to be engaged to “not wanting to be engaged,” she said. “There are still a lot of unknown factors we haven’t figure out together … like there’s still another woman involved, or where are we going to live?”

Also Read: 'The Bachelor' Alum Lauren Bushnell On Who She Hopes Will Win Nick Viall's Heart

One of the main concerns for Grimaldi and Viall leading up to the finale was where the couple would nestle once the show was over: Grimaldi is from Montreal, Canada, where Viall admitted he couldn’t see himself moving. Last week, Grimaldi questioned whether their relationship would even work given the distance.

In a voiceover, Nick revealed that Vanessa could say no to a proposal. “She wants assurances that aren’t realistic,” he said.

Clearly she said yes — and the happy couple now just have to decide whether they live north or south of the border.

“Shall we go start our life?” Viall asked, as they got into a horse-drawn sleigh.

From ex-boyfriends to fertility clinics, see which hometown dates have been the most uncomfortable on ”The Bachelor“ and ”The Bachelorette“

Take a look back at the most awkward hometown dates before Nick Viall meets the families of the last four women.