Former “Bachelorette” contestant Clint Arlis died by suicide from hanging, according to the coroner’s investigation report obtained by Page Six.

Arlis, who competed for the affections of Kaitlyn Bristowe on the 11th season of the ABC reality dating series, had been struggling with paranoia and had recently moved in with his parents, who thought “things were getting better,” investigators said according to the report.

The 34-year-old was found by his father on Jan. 11, TMZ reported. He left a note on his dresser, according to the report, which was obtained through a Freedom of Information Act request.

“It is with great sadness, to tell you that my family has lost my best friend and older brother Clint on the morning of January 11th,” Arlis’ sister Taylor wrote on Facebook a few days after his death. “Please respect our family’s privacy as we try to cope with this great loss.” 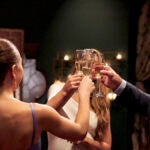 Bristowe paid tribute to him on Instagram at the time, writing, ” I’m not sure what happened, how it happened. All I want to say is that from knowing him on the show, even though things didn’t end on the best terms for us, from his time on the show until today, I have heard nothing but incredible things about that person … Clint was very well respected in his world, and it’s an absolute tragedy what’s happened.”

Arlis was also remembered in a heartfelt tribute from his high school wrestling coach Scott Bayer.

“It is with a heavy heart and a sense of profound loss that we announce the death of one of the Batavia Wrestling Program’s All-Time greats,” Bayer tweeted on Jan. 13. “He was [a] talented artist with a sharp wit, a sardonic sense of humor and palpable authenticity.”