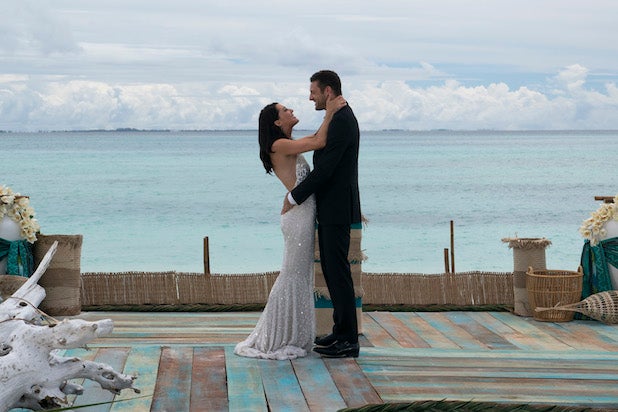 Though many people on social media (or who read news about Instagram activity) don’t “Like” Becca Kufrin’s choice of fiance, ABC is sure in love with how its “Bachelorette” season finale performed last night.

Winning all six half-hours of Monday primetime with its three-hour “Bachelorette” finale, ABC doubled second-place NBC’s rating in the adults 18-49 demographic. While its victory over the “American Ninja Warrior” home’s overall audience size wasn’t as vast, the gap was still quite sizable.

ABC was first in ratings with a 1.8 rating/8 share in the advertiser-coveted 18-49 demographic and in total viewers with an average of 6.7 million, according to preliminary numbers. “The Bachelorette” was the only show on ABC’s primetime schedule.

Fox and Telemundo tied for third in ratings, both with a 0.6/3. Fox was fourth in total viewers with 2.5 million, Telemundo was fifth with 1.4 million.

For Fox, “So You Think You Can Dance” was the only show on its primetime schedule, averaging those Nielsen numbers over two hours.

Univision was sixth in ratings with a 0.3/1 and in viewers with 1.2 million.