(Spoiler alert: This story contains spoilers for Tuesday’s episode of “The Bachelorette”)

ABC’s “The Bachelor” dating franchise has a relationship with race and diversity that can be summed up in a Facebook update: It’s complicated.

This summer’s 12th season of “The Bachelorette” began with a half-Iranian star, Joelle “JoJo” Fletcher, and five non-white suitors. But after Tuesday’s third episode, Fletcher eliminated four of those five bachelor contestants. All 20 white contestants remain in contention to get the final rose.

That continues a troubling pattern for a show that has all too often failed to feature non-white contestants. Though 2014 “Bachelor” Juan Pablo Galavis was Venezuelan-American, there still hasn’t been an African American or Asian “Bachelor” or “Bachelorette” in 32 seasons of the franchise.

And even when non-white contestants are cast, they seldom go very far. As documented by Karen X. Cheng, a blogger who also makes commercials for brands like Beats By Dre, 24 Hour Fitness and Apple, people of color fare about as well in “The Bachelor” franchise as they do in horror movies — a genre depressingly famous for killing off non-white characters early on.

TV’s most successful dating series has been criticized for years for its lack of non-whites among both the leads and the 25 contestants who vie for their affections.

In 2012, two Nashville men filed a class-action lawsuit accusing the show of racial discrimination after 2011’s “Bachelorette” season starring Ashley Hebert included no minorities out of 25 contestants. The suit was dismissed after the network and the producers argued their casting decisions are protected by the First Amendment.

Since then, the “Bachelor” franchise has included more minorities. Ben Higgins, the most recent Bachelor, had four non-white women (five, if you count Fletcher) on the show, one of whom, Caila Quinn, made it to the top three.

But critics say Fletcher’s season so far underscores the scope of the problem. 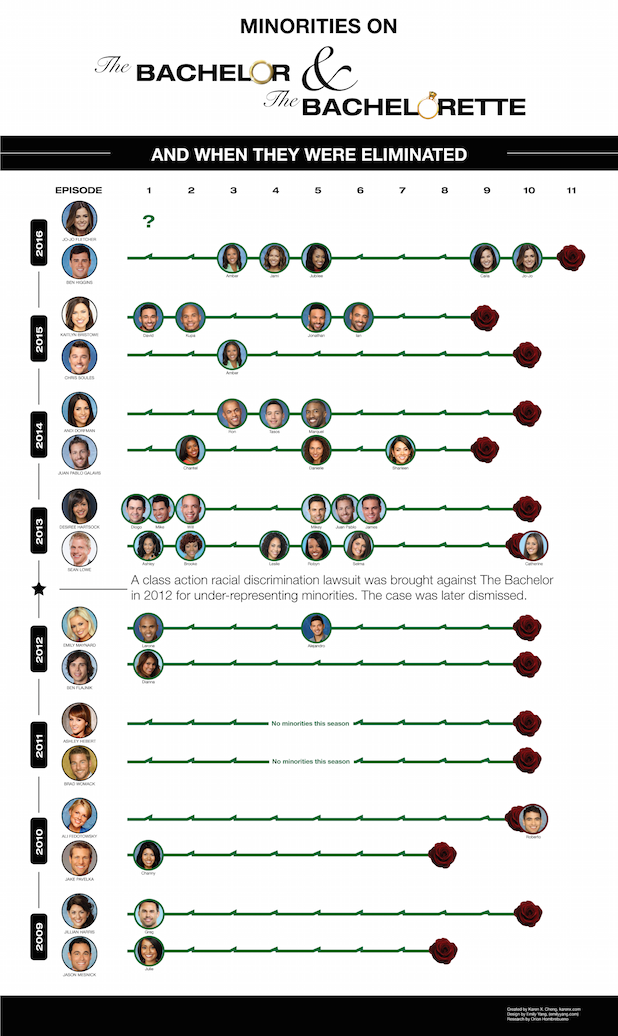 Although the show has highlighted the fact that Fletcher’s mother is Iranian, her ethnicity is debatable — like everything involving race in America. The U.S. Census defines people of Middle Eastern background as white. But many with Middle Eastern roots say that designation essentially erases them from America’s headcount.

“My organization and other organizations did make a big push to include Iranian Americans on the census and ultimately, we fell short, it’s not included, but they are doing this provisional category which is Middle Eastern,” said Jamal Abdi, Policy Director of the National Iranian American Council. “I’m in the same boat, I’m half Iranian, but I check ‘White/other.’ However, it’s not an accurate category to put us in.”

ABC and Warner Horizon, which produces both “The Bachelor” and “The Bachelorette,” declined to comment for this story. 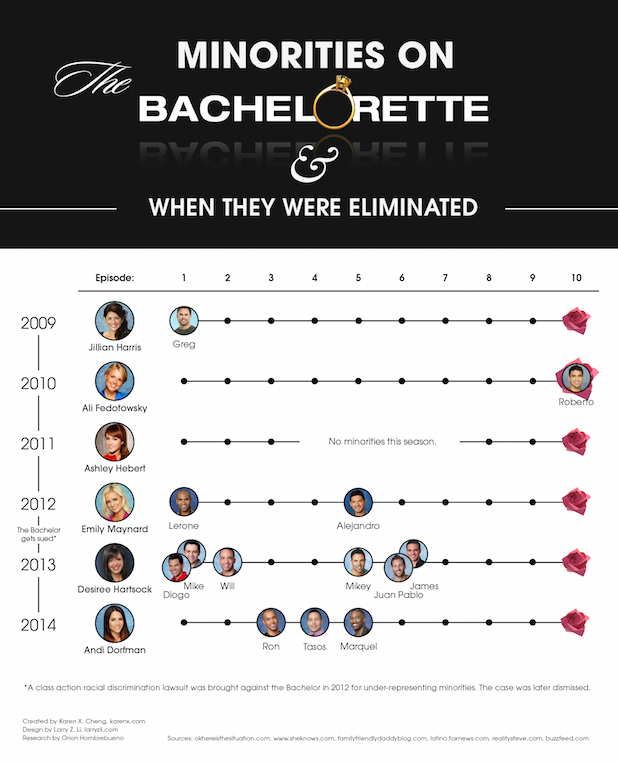 Producers also argue that due to the nature of the show, they have no control over how far any contestant — white or not — will go in winning the chosen star’s affections.

An individual with knowledge of the casting told TheWrap that producers cast the show based on the type of romantic partners the bachelor or bachelorette is interested in, and that it’s completely up to him or her who passes into the next round each episode.

“That’s what makes unscripted television compelling, when it’s up to them,” the individual said. “Part of what makes ‘The Bachelor’ authentic is the desire to fall in love and make it last forever. You can’t force that to happen because then it won’t resonate with the audience.”

He agreed with franchise producer Mike Fleiss, who in a 2013 interview with Entertainment Weekly said non-white people simply “don’t come forward” to take part in the show as often as white people.

“We really tried, but sometimes we feel guilty of tokenism,” Fleiss said. “Oh, we have to wedge African-American chicks in there! We always want to cast for ethnic diversity, it’s just that for whatever reason, they don’t come forward. I wish they would.”

Candra Nazzaro, an Asian-American reality casting director who has worked on “Wife Swap” and “America’s Got Talent” and is a member of the Casting Society of America, agreed.

“There is a misconception that we have huge piles of applicants to pick from on every show,” said Nazzaro, who has never personally worked on “The Bachelor” or “Bachelorette.” “It couldn’t be further from the truth, though. We proactively seek out fresh faces and dig deep to find characters who are interesting, exciting and will make for the best cast … If we’re talking racial diversity, we generally don’t get a lot of applicants.” 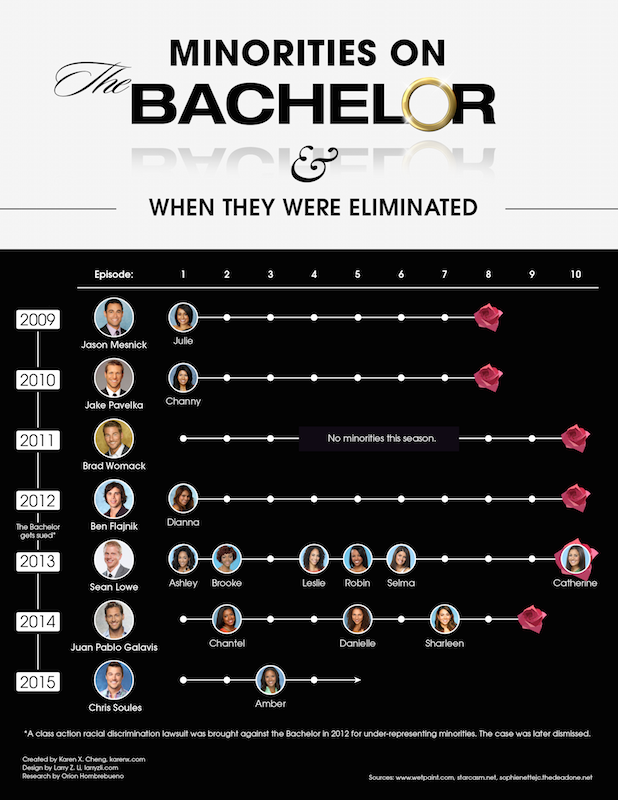 Why does it matter? “The Bachelor” and “Bachelorette” are all about the fantasy of finding a perfect soul mate. When only white people are represented, the show sends a signal, intentionally or not, about who in our society is attractive and lovable.

“Black women are not the prototype for beauty here in America,” said Turner. “This has never been a show that’s been very ethnic friendly so it’s not surprising that the prevailing culture of that show would seek to eliminate people who don’t look like them.”

Diversity consultant Joshua Fredenburg explained that business interests tend to prevail when casting shows. “In my experiences with television, normally it’s about ratings,” he told TheWrap. “If a person of color is not chosen, it’s possibly because of the desire to get ratings. They probably do not believe a minority can do that.”

Fredenburg noted that some Americans are still uncomfortable with interracial marriages, which have grown only 8.4 percent since the 1967 Supreme Court ruling invalidating miscegenation laws. “According to the Pew Research Center, white males and females have the lowest [percentage] of dating outside their race — they were only at 7 percent,” he said.

Also Read: Why 'UnReal' Cast a Black Bachelor Before 'The Bachelor' Did 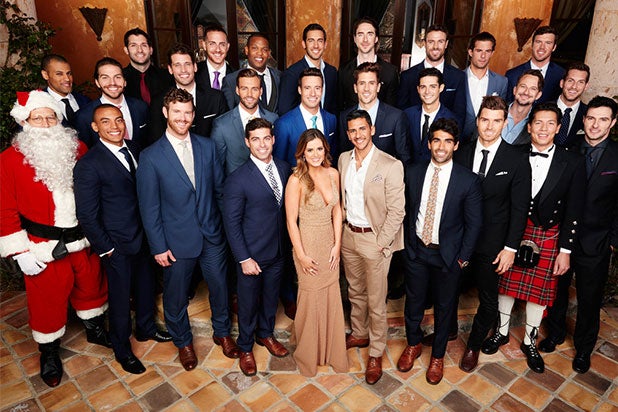 Ironically, ABC has made a conscious effort recently to make programs that look more like America. It is the home of the African-American comedy “black-ish,” the Asian family comedy “Fresh Off the Boat,” and the acclaimed “American Crime,” which looks at the role of race in the justice system.

It’s also the home of Shondaland, the suite of shows created by Shonda Rhimes, the most powerful African-American showrunner in television.

In January, former ABC entertainment boss Paul Lee said he expected this summer’s “Bachelorette” to be “diverse” — the industry’s catchall term for people who are not white.

Soon after his prediction, Lee, who is himself white, was replaced by Channing Dungey, who is African American.

“The Bachelorette” airs Monday at 9 p.m. on ABC.