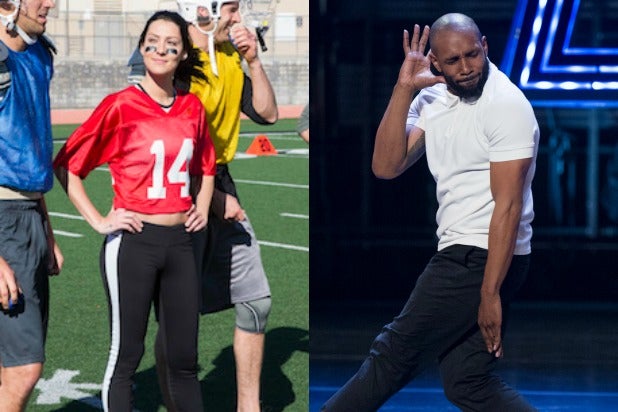 Becca and her boys brought ABC first place in Nielsen ratings and total viewers Monday night, with a fresh episode of “The Bachelorette,” according to preliminary numbers.

The dating competition series dipped a bit from last week’s installment, but won as one of the only new programs on the Big 4 networks for the evening, and easily tackled Fox’s second week of “So You Think You Can Dance” in the 8 p.m. time slot.

And while “SYTYCD” held steady against its premiere seven days ago, it didn’t post high enough numbers to win in a dance-off with CBS and NBC for eyeballs and the all-important adults 18-49 age range — even though the two broadcasters aired mainly reruns.

ABC was first in ratings with a 1.2 rating/5 share in the advertiser-coveted 18-49 demographic and in total viewers with an average of 4.7 million, according to preliminary numbers. At 8, “The Bachelorette” earned a 1.4/6 and 5.5 million viewers. It was followed by a repeat of “The $100,00 Pyramid”

NBC was second in ratings with a 0.7/3 and third in viewers with 2.9 million, filling the night with reruns.

Fox, Telemundo and Univision tied for fourth in ratings with a 0.5/2.

Telemundo was sixth in viewers with 1.3 million.