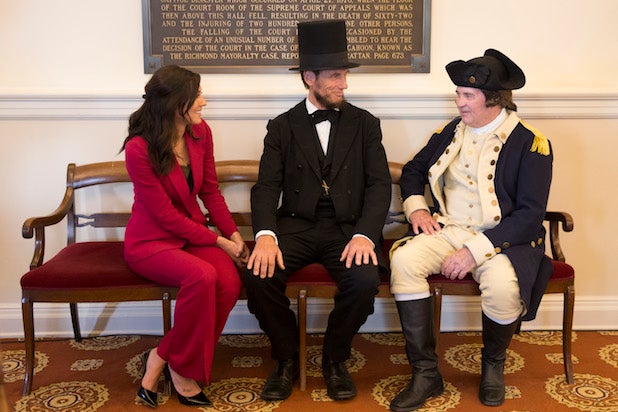 “The Bachelorette” was all about romance Monday night — and promoting the state of Virginia. However, not many viewers were up for the trip to the Old Dominion, even though VA’s official slogan is “Virginia is for lovers.”  If fans were looking for somewhere a little more “traditionally” amorous, well, sorry.

Becca Kufrin and her boys headed to Richmond on the state tourism board’s dime and were probably a little too into the history-packed field trip, ’cause fans took to Twitter to call BS.

“No offense to the state of Virginia, but by week 6 of the Bachelorette these guys were definitely expecting to be in Italy,” one user tweeted. “This is the most low budget season I’ve seen. Only ONE randomly placed hot tub and no yachts yet!!!”

“I still can’t get over the fact that ABC took the bachelorette crew to freaking Richmond, Virginia,” another wrote.

OK, it probably didn’t help that this installment of the ABC dating series opened with a four-minute pitch for why Virginia is the best place ever to fall in love. Yeah, the pitch for the Commonwealth was pretty heavy-handed. And then Leo also said this, “Just like Virginia birthed the nation, I hope that it births a relationship that really lasts with Becca.”

“The Bachelorette” airs Mondays at 8/7 c on ABC.

“If Becca can make Richmond Virginia fun, she is clearly my future wife.” —every guy on tonight’s #Bachelorette

I still can’t get over the fact that ABC took the bachelorette crew to freaking Richmond, Virginia #budgetcuts @BacheloretteABC

tonight on the bachelorette they went to richmond, virginia and as a richmond, california native i am….. bothered

No offense to the state of Virginia, but by week 6 of the Bachelorette these guys were definitely expecting to be in Italy. This is the most low budget season I've seen. Only ONE randomly placed hot tub and no yachts yet!!!

I mean, nothing against Virginia but….

That’s it. That’s all I gotta say.#TheBachelorette

“virginia is for lovers” #TheBachelorette
me: pic.twitter.com/MhkQllDx0y