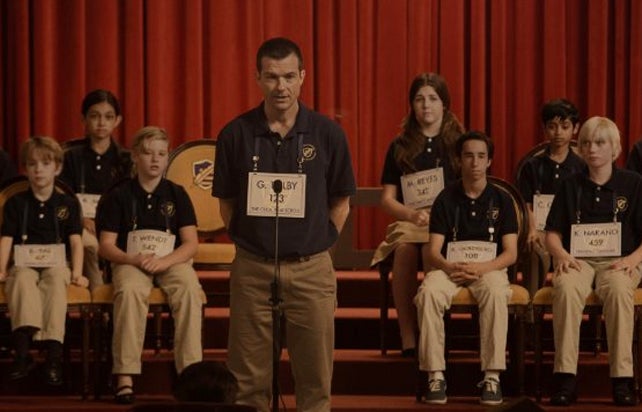 Jason Bateman is tired of being the straight man. After playing the yuppie family guy in “The Change-Up,” “Identity Thief” and TV’s “Arrested Development,” Bateman thrusts both middle fingers into the air — one at his nice-guy image and the other at good taste — in “Bad Words,” his abrasive directorial debut.

As a dark comedy that leans more on shock than actual humor to produce laughs, this tale of a miserable sonovabitch (Bateman) hell-bent on destroying a kids’ spelling bee shares with the tonally similar “Horrible Bosses” a misanthropic verve that exhilarates in the first act and grates by the third.

Shorn of his white-collar good looks with an unflattering buzzcut, Bateman stars as Guy Trilby, an eighth-grade dropout who exploits a loophole in the spelling-bee rules to enter a national competition. Guy’s an arrogant competitor and a sore winner, advising the parents in the audience at a regional contest to pick up some rubber pillowcases for the night: “[The] little pricks are going to be counting tears, not sheep.”

Despite his juvenile antics, Guy is obviously whip-smart (he’s later revealed to have a genius IQ and a photographic memory), so there’s clearly something else making him act like an a-hole.

The mystery of his motivation isn’t revealed until much, much later, when it reaches the “too little, too late” mark, though it’s telegraphed steadily beforehand. Until then, quirky characters are what happens to movie protagonists while they’re busy making other plans, so Guy soon has his plate full between frumpy blogger Jenny (Kathryn Hahn), who orders him not to look at her while they do the naked grunt, and fellow competitor Chaitanya (Rohan Chand), a preteen with a gapped-smile, too-short pants, and no parental supervision who pathetically trails Guy like a three-legged puppy.

Allison Janney‘s death glares and Philip Baker Hall‘s walrus-eyed gravitas are also put to good use in those character actors’ side roles as incensed spelling-bee officiators.

The formula-hewing friendship between Guy and Chaitanya largely sidesteps sentimentality because the older man is too shameless to ever feel regret. One night, the two pals go on a giddy meanness spree: they prank a random driver into thinking he’s run Chaitanya over, leave a live lobster in a men’s room toilet (yes, the worst does happen), and buy the ten-year-old a private peep show with a prostitute. Expertly cut and timed, the sequence is the film’s absolute highlight.

Clearly, and admirably, “Bad Words” strives to keep the hugging and learning to a minimum. Too many a film comedian has been chewed up and spit out by the redemptive-arc machine, which produces soft and indistinguishable lumps of meat in polo shirts whose personalities are subsumed by apologies. Bateman knows this, which is why he smartly employs a light touch in making his character more sufferable.

And yet it’s that same unrepentance that makes “Bad Words” an occasionally hostile experience. Guy punches often and always low, and because Bateman never gets enough distance from his character, he asks his audience to go along with his character’s deeply sexist and racist jokes. He has a cover: Guy’s insults are probably more competitive trash talk, albeit on the extreme end, than reflective of personal biases.

Either way, it still means sitting through the character elaborately comparing a woman’s vagina to an old sweat sock for a solid minute and listening to him call Chaitanya “Slumdog,” a Thai prostitute, a terrorist, and sundry other brown-skin-specific slurs throughout the film, none of which are remotely funny. Sure, the boy eventually stands up for himself, but watching Guy offend women, non-white and fat kids (the vast majority of his targets) is simply dispiriting in its lack of imagination about what “edgy comedy” can mean.