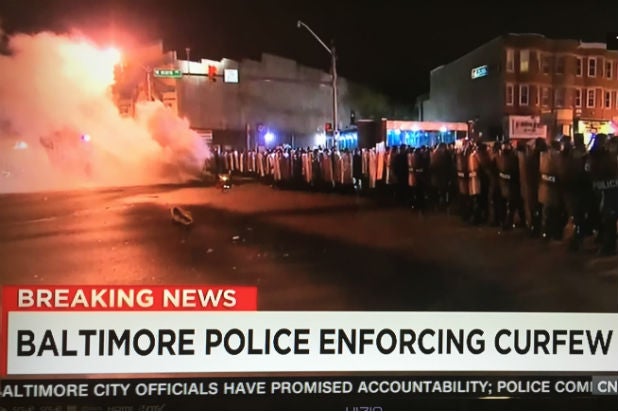 Police fired tear gas at crowds of protestors and reporters in Baltimore as the 10 p.m. ET curfew passed Tuesday night.

“Hundreds of protesters are defying the curfew,” CNN’s Don Lemon said 43 minutes after the deadline, describing the city as “just shy of a lockdown.”

Baltimore Mayor Stephanie Rawlings-Blake announced Monday that a week-long curfew from 10 p.m. to 5 a.m. beginning Tuesday would be enforced to curtail the violence that erupted following the funeral of Freddie Gray, a young black man who died on April 19 after suffering severe spinal injuries while in police custody.

Police urged crowds and media to retreat as people threw bottles, prompting the authorities to respond with tear gas and rubber batons.

“There are no real bullets hitting anybody. This is not an ideal night in Baltimore but it could be a lot worse in terms of violence,” CNN reporter Chris Cuomo said. No stranger to being on the front lines, Anderson Cooper continued CNN’s coverage from Baltimore at the 11 p.m. ET hour with “360.”

MSNBC also had reporters live at the scene during “The Last Word With Lawrence O’Donnell,” as police advanced on what they called a “group of criminals” who had started a fire outside a public library branch at Pennsylvania and North Avenues.

Fox News aired a two-hour special edition of “Hannity” dedicated to the uprising, including interviews with Gray family attorney William “Billy” Murphy, who said the 25-year-old’s “cries for help were ignored” when in police custody, where he later died. “Running from the police is not a crime, there’s no felony of running while black,” he told Sean Hannity.

Geraldo Rivera almost came to blows with one protestor because he was ruining his shot, “Stop blocking my camera,” he said in heated frustration.

NBC DC reporter Shomari Stone was in the midst of the action and tweeted video of the line of police in riot gear moving the crowds back.

Along with the curfew, Gov. Larry Hogan called in the National Guard on Monday and declared a state of emergency. Meanwhile, the Baltimore Orioles announced that they would play Wednesday’s MLB game against the Chicago White Sox in the eerie silence of a closed Oriole Park, but that Thursday’s double-header would be open to the public.