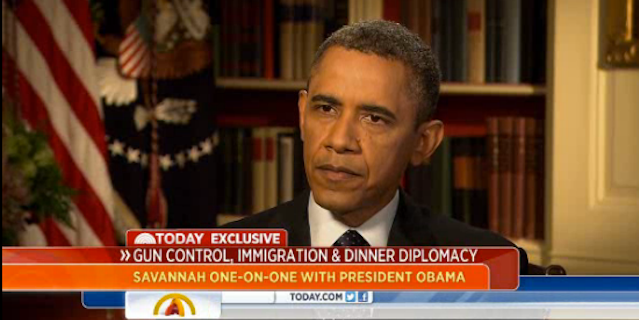 “I feel personally responsible the same way I hope every parent out there feels responsible for all our kids,” he told Savannah Guthrie in a “Today Show” interview that aired Wednesday morning.

The pre-recorded interview was taped on Monday, just hours before two explosions at the Boston Marathon killed three and injured over 170 others.

The seemingly senseless attack at the annual foot race — where a group of eight runners participated to raise money for the Newtown Strong Fund, nonetheless — has effectively plunged the country into yet another somber mood just months after the Newtown shootings did.

Gun-control legislation has since risen to the forefront in Washington, D.C., with a Senate vote on an amendment to expand background checks on gun purchases scheduled to start Wednesday afternoon.

The President did not say whetherhe was confident the bill would pass, but he did stress the importance of the issue.

“The key thing for me, is every once in a while we are confronted with an issue that should transcend politics,” Obama said.

The President also commented on another hot issue: Jay-Z and Beyonce’s trip to Cuba.

“I wasn’t familiar that they were taking the trip. My understanding is I think they went through a group that organizes these educational trips down to Cuba,” Obama said. “You know, this is not something the White House was involved with. We’ve got better things to do.”